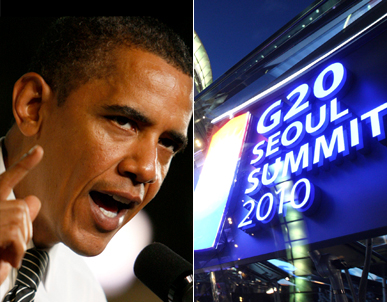 The G20 group of the world’s most important economies are poised to make an unprecedented announcement: the earth would stop turning if certain banks went bankrupt. According to British daily The Financial Times, the G20 will unveil a list of 20 banks it considers literally “too big to fail”, when the group meets in Seoul, South Korea November 11 and 12.

The G20’s new financial reforms, the FT says, is making official what was already a well-known mantra of the 2008 financial crisis, namely that some banking giants are so entwined with global economic activity that their fall would collapse the entire system.

The governments and financial regulators prefer to talk about a special “regime” for the massive banks, which would thereafter be known as global systemically important financial institutions – or GSifis.<

The GSifsis list would be a kind of elite class of the international banking system, and is expected to include the French Société Générale and BNP banks, along with other top American, British, Japanese, Spanish, Swiss, Canadian, German and Dutch entities. According to the FT, the list of 20 has not been finalised. “It could seem incredible that we would elevate these banks to such a standing while we consider designating Greece as insolvent, but [the reform] is simply trying to deal with a reality,” said Laurence Scialom, a professor at Paris-Ouest University and specialist in the banking system. According to Scialom, the list should be longer and should not be restricted to banks.

The honour of being named to this exclusive club, however, comes with caveats. GSifis, it would seem, will be subject to increased responsibilities.

According to the FT a new global regulatory group will be created to police the way national regulators supervise their GSifis and impose tighter rules as well as possible capital surcharges and mandatory losses on creditors in the event of a government bailout.

“Until now, we bailed out these banks and there was no accountability in return,” explained Scialom. “That is about to change.”

In fact, those caveats do not sit well with the banks in question, which already expressed their displeasure after the Basel Committee on Banking Supervision outlined the core rules of its new regime in September.

“Of course they will resume their lobbying activities, arguing that forcing them to increase their capital will allow them to lend less money,” said Scialom.

And it remains to be seen how the banks left out of the special regime will react. This G20 initiative draws the outlines for a two-tier banking system. The risk for the banks that don’t make the cut, is that clients could feel inclined to put their money in a bank that has officially been made bankruptcy-proof.