Lebanese wave their national flag as they attend a rally marking the fifth anniversary of the assassination of Lebanese premier Rafik Hariri in downtown Beirut on February 14, 2010 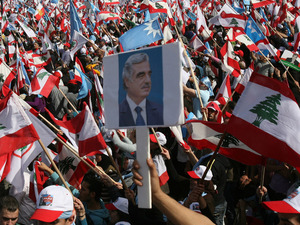 Growing fears that tensions in Lebanon between Sunni and Shiite Muslims could lead to a sectarian war.

A special, U.N.-backed tribunal investigating the assassination of former Lebanese Prime Minister Rafik Hariri is adding to the strain. The leader, a Sunni, died in a car bombing in Beirut in 2005.

The tribunal is expected by the end of the year to indict members of Hezbollah, the powerful Lebanese Shiite faction. Leaders of the Iranian-backed group say they won’t stand for being formally accused of responsibility for the murder.

Lebanon’s various allies in the Middle East and the West are engaged in a flurry of diplomatic trips around the region to keep the government from falling and violence from erupting.

But many Sunni Muslims in Lebanon say they want someone to pay for the death of their popular prime minister. But they also worry about potential violence if Hezbollah members are indicted.

In a Beirut cafe called Future, a retired civil servant, Abu Haisam, likened the current tension between the Sunni and Shiite sects to a volcano that is ready to blow.

Every Lebanese is thinking Apocalypse Now.

“Hezbollah isn’t going to stay quiet. I mean, these guys are heavily armed by Iran,” he said. “They were given those weapons to fight Israel and now they are turning them on us.”

The 85-year-old and many others in Beirut fear a repeat of May 2008, when Shiite gunmen took over the Muslim part of Beirut after the government tried shutting down Hezbollah’s telecommunication network, among other things.

In a Shiite neighborhood, lottery worker Mustafa Fawaz shares Abu Haisam’s concerns about the growing rift. But the 52-year-old blames Israel and the United States for stirring up the tensions.

He, like many Lebanese Shiites, accuses the two countries of manipulating the U.N. tribunal into falsely accusing Hezbollah to embarrass its main patron, Iran. They argue the tribunal should be done away with before any indictments come out.

It is especially since the Lebanese government had agreed earlier to drop allegations of Syrian involvement in the bombing. That agreement cost the younger Hariri a lot of support.

Lebanese politicians on both sides are thus far refusing to budge. Analysts fear the dispute could topple the fragile coalition government, which is led by Hariri’s camp and backed by the U.S. and Saudi Arabia on one side, and includes Hezbollah, backed by Iran and Syria, on the other.

Hezbollah lawmaker Ali Fayyad claimed the tribunal has no credibility and that the Shiite faction has a right to defend itself against false allegations.

“We consider one result of the indictments must be more escalations of the tensions between the Sunnis and Shiites in this country and maybe out of this country on the regional level,” Fayyad said.

But Fares Soueid, the secretary general for Hariri’s coalition, claimed such assertions are only an attempt to give the guilty parties a way to avoid prosecution.

“It’s the first time we can reach justice in Lebanon,” he said, adding that the U.N. tribunal’s actions need not lead to sectarian strife.

“Every Lebanese is thinking Apocalypse Now — that this tribunal is coming with an apocalyptic vision. I think it’s not true,” Soueid explained.

Some Lebanese agree with him.

Hilal Khashan, who teaches political science at the American University of Beirut, is optimistic that, given international pressure, the sides will reach a compromise that makes everybody only “half upset.”

Salem, of the Carnegie Middle East Center, said the Lebanese government may also try to buy more time by asking the tribunal to review its investigation and delay issuing its findings.