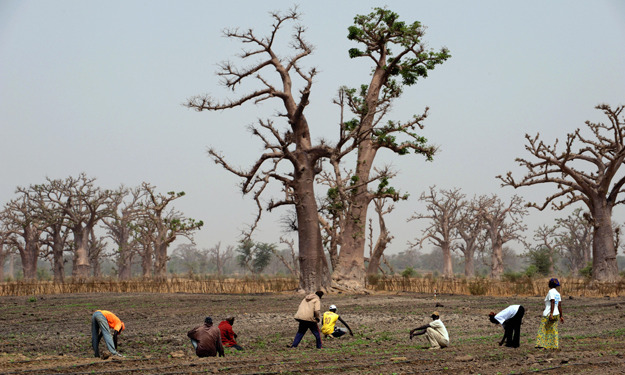 Despite months of warnings, aid agencies have fallen badly short in raising funds to head off a hunger crisis imperiling more than 10 million people in some of Africa’s poorest countries on the southern edge of the Sahara. This week the World Food Program said that because of a massive funding shortfall, it will not be able to provide food as planned to 1 million people in Niger, the worst-hit country in the region and one of the poorest in the world.

In the landlocked country, which lies at the very bottom of the U.N. Human Development Index, nearly 1 million children under the age of 5 are acutely malnourished, according to the United Nations. Of those, nearly a third are close to starvation. The British aid organization Oxfam says the WFP funding shortfalls mean that 60 percent of Niger’s hungry will be left out of U.N. food distributions.

Niger’s grim predicament illustrates the skewed calculus of humanitarian aid. Experts say nothing opens people’s pocketbooks like a dramatic disaster on the order of the Indian Ocean tsunami of 2004 or Haiti’s earthquake in January. The far greater human cost of the flooding in Pakistan gets relatively less attention. But the most yawning gap between need and resources opens in countries beset by the more gradual disaster of grinding, chronic poverty.

Relief organizations began issuing warnings about the coming problems last October, after sparse rains led to a poor harvest. If sufficient funds had arrived on time, the disaster now unfolding in Niger, Chad, Mali and Mauritania would have been far smaller in scope, say aid workers on the ground.

“Donors could have given early and in larger amounts, and the crisis would not have reached such a severe level as it has reached now,” said Dr. Guido Cornale, the head of the UNICEF mission to Niger. He said aid agencies should have received most of their funding by April to keep families supplied with enough food and money to get them through the annual “hunger season.”

Unlike most crises that hit the headlines, the current hunger crisis is not due to a war, natural disaster or pandemic disease. While the drought triggered the current problems, the underlying problem is the chronic poverty and lack of basic infrastructure that keep many of the people living in sub-Saharan Africa on the edge of catastrophe.

“For the children of Niger, every year is a crisis year. The only thing that varies is how much attention it receives,” said Dr. Susan Shepherd, a nutrition expert with Doctors Without Borders. “Every year hundreds of children are losing weight in the hunger gap, and there is no reason to wait until that happens.”

The U.N. estimates that 16.7 percent of children under 5 are acutely malnourished in Niger this year, compared with 12.3 percent at the same time last year. Last year’s already devastating rate was not enough to ring international alarm bells. The numbers show the annual hunger problem is less a cycle than a downward spiral, since each time it happens farmers are forced into debt, herders lose their livestock and children suffer lifelong effects to both their brain and body.

Niger is a case study in the problems of an international aid system that focuses on emergencies to the exclusion of prevention. There is no doubt Niger needs plenty of help. It has one of the world’s highest birthrates, two-thirds of the population is below the poverty line and even in a normal year, 20 percent of children die before reaching 5. Until recently, it also had a government that was loath to admit there was a hunger problem.

This year, desertification and global food price spikes have made things even worse. The hunger season came early, and by mid-May emergency feeding clinics were more crowded than usual. By June 133,288 children had already been treated for severe malnutrition. Now, there are more than 7,000 children being brought to emergency centers each week, up from 3,000 just a few months ago. Overall, an estimated 8 million people are at risk for going hungry in Niger, 1.6 million in Chad, 600,000 in Mali and 300,000 in Mauritania. At present, the total aid request of $724 million is only 41 percent funded.

With hunger in the region a perennial problem, relief agencies say wealthy countries should have done more, and sooner, to avert the problem. After the last big hunger crisis in 2005, when 5 million people in the region were hungry, international donors like the U.S. and the European Union came under fire for waiting until the crisis had metastasized before sending in aid.

This time, Famine Early Warning Systems Network, the U.S. government agency that monitors famine, issued a warning in February: “Severe food crisis imminent.” As a result, Europe and the U.S. did send in aid earlier, but it was not nearly enough. In fact, one third of the U.S. donation was not even expected to arrive until this month, a result of America’s outdated and often criticized food aid system. By this summer, the initial call for funding had been only 60 percent filled. Now, in Niger, the World Food Program is $74 million short of funds, which is forcing it to scale back its plans to feed 8 million hungry people.

Foreign aid tends to be not only reactive but also highly political. Nations not considered strategically important, like Niger and the other Sahel countries, receive relatively little funding and media attention. By this summer, the crisis had been written about only once in the U.S. national press and once in the British press.

What’s really needed to break the cycle of recurrent hunger is for wealthy countries to provide long-term assistance for improved agriculture, irrigation and basic infrastructure like water and sanitation, say aid experts. So far, Niger has not been included in either the Obama or Bush administration’s large-scale development programs.

“The whole humanitarian system is very bad at preventative work,” said Gareth Owen, the emergencies director for Save the Children. “It’s like if there is going to be a plane crash, and people want to see it crash before they do anything.”