In this photo, the reactor building of Iran’s Bushehr nuclear power plant is seen, just outside the port city of Bushehr, 750 miles south of the capital, Tehran, in this Nov. 30, 2009, file photo. Russia’s nuclear agency spokesman, Sergei Novikov, said Friday fuel will be loaded into Iran’s first nuclear power plant next week, marking the start of its launch. 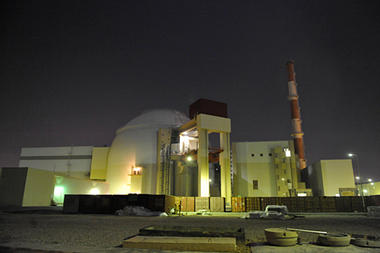 The controversial Bushehr nuclear power plant in southern Iran has been an on-again, off-again project for years as Russia, the plant’s builder, has dragged its feet in an effort to allay international concerns over Iran’s alleged nuclear-weapons drive.

But on Friday, Russia’s state nuclear agency, Rosatom, announced that in one week’s time it will load nuclear fuel into Bushehr’s Russian-made reactor, which is the first step to making it fully operational.

“The fuel will be charged in the reactor on 21 August. From this moment, Bushehr will be considered a nuclear installation,” said Rosatom spokesman Sergei Novikov, in a terse announcement. “This will be an irreversible step.”

Why the change of tune?

Experts say the decision probably represents a compromise in a long-running dispute among Russian policymakers over what to do about Iran. And, despite appearances, the decision to finish Bushehr probably reflects a defeat for hard-liners who favor stronger military and political ties with Tehran.

In June, Russia moved briskly toward the US position by backing a fourth round of United Nations sanctions against Iran over its failure to stop enriching uranium – a key step toward attaining nuclear weapons capability. The measures include financial controls and a tough arms embargo.

Nuclear plant, but no missiles

Russia’s acceptance of the new sanctions compels it to shelve a lucrative contract to provide advanced S-300 air defense systems, roughly comparable to the US Patriot missile, under an $800-million contract that was signed between Moscow and Tehran in 2005.

“The S-300 was the subject of a fierce struggle inside the corridors of Russian power, and a lot of people in our military-industrial complex warned that failure to deliver the weapons as agreed would ruin our competitive position in the world’s arms market,” says Sergei Strokan, a foreign policy columnist with the Moscow daily Kommersant newspaper.

Igor Korotchenko, a Russian analyst connected to the arms industry, argued that Russia could lose up to $13 billion in future weapons sales to Iran by canceling the S-300 deal.

However, after some delay, Prime Minister Vladimir Putin acknowledged that the S-300 was covered by the new UN sanctions regime.

“Those who favor a ‘reset’ of relations with the US have won, at least for now, but they had to give something to the other guys,” says Mr. Strokan. “So, the answer is to go ahead and complete Bushehr. It’s a civilian nuclear power plant, which will be under tight supervision of the International Atomic Energy Agency, and doesn’t pose any proliferation risk. It also may be a small way to try and save our relations with Iran, which have been nearly destroyed by Russia’s decision to back the new sanctions declaration,” he says.

An angry Iran
Iran reacted furiously to Moscow’s abandonment of its long-held opposition.

In a July speech, Iranian President Mahmoud Ahmadinejad complained that Moscow was now reading from “a US-authored script,” and suggested that Kremlin leaders were “liars and cowards” for deserting Iran.

Last week, Iran’s Fars News Agency, which has ties to the country’s Revolutionary Guard, claimed that Iran had obtained two S-300 missiles from Belarus and two others from another unspecified source.

The construction of the nuclear plant at Bushehr was begun in 1975 by several German companies. They withdrew following a US embargo on high-technology supplies to Iran after the 1979 Islamic Revolution and Tehran’s subsequent siege of the US Embassy. In 1998, Rosatom signed a $1 billion contract to build a 1,000-MW Russian-designed light-water reactor, which has been compared to installing a Russian engine into a German car.

“It’s been obvious since the Russian delegation at the UN insisted in June that no sanctions regime would include Bushehr, that the plant was going to get completed soon,” says Yevgeny Satanovsky, president of the independent Institute of Middle East Studies in Moscow. “It’s not the main problem, anyway. The main threat to Israel and regional peace doesn’t come from Bushehr, it comes from the Iranian regime.