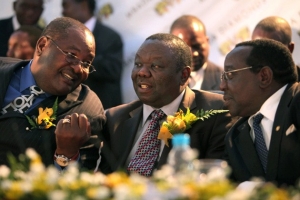 A stash of gemstones that human-rights organizations allege were mined by virtual slaves who were threatened with death goes on sale today in Zimbabwe, having been approved by an international regulator.

About 900,000 carats in rough diamonds from the Marange field were brought to Harare airport, reports the Associated Press, “where several private jets brought buyers from Israel, India, Lebanon, and Russia.” It is estimated that Zimbabwe could extract stones worth up to $2 billion each year from Marange.

An international network, the Kimberley Process, which tries to prevent the sale of blood diamonds, approved selling the gems despite widespread claims that as many as 200 people have been murdered by government troops at Marange, and that many more have been raped or forced to mine the field, one of southern Africa’s richest, since it was discovered in 2006.

Human Rights Watch alleges that children were still working 11-hour days without pay or reward as recently as 2009. Zimbabwean authorities deny the claims.

There are fears that money from the sale of the stones will be misappropriated by Zimbabwean strongman Robert Mugabe and members of his governing ZANU-PF party, which controls the country’s mining interests. The BBC reports that Mugabe, whose traditional power base has lain within the military, told troops yesterday to “jealously guard” natural resources.