Ed Stafford proposed becoming the first person to walk the 4,000-mile length of the Amazon from source to sea, he was roundly dismissed.

Fixers in Brazil said the experienced trekker would probably die and refused to have anything to do with him.

The expedition community said it was too far: that he would get ill or that the dense forest, biting insects, snakes, bogs, jaguars and fearful tribes would be too much.

Desperate to prove them wrong, the former Army captain set off in April 2008, estimating it would take him a year.

Almost two-and-half-years and 859 continuous days of walking later he has completed his epic journey. 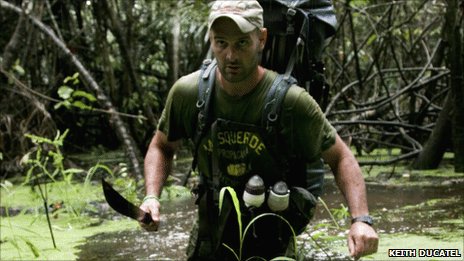 Speaking from the Brazilian jungle with days left to walk, the 34-year-old from Hallaton in Leicestershire told the BBC: “I’m feeling quite rough around the edges.

“We’re doing 10 or 11 hour days in the equatorial sun, we’re very tired but deep down buzzing with excitement.”

Sir Ranulph said becoming the first person to walk the length of the river with just a backpack “puts Stafford’s endeavour in the top league of expeditions past and present”.

Three months into the challenge, Ed’s original walking partner returned home after the pair fell out.

He was joined by Peruvian forestry worker Gadiel “Cho” Rivera, who agreed to escort him for five days past drug traffickers and hostile tribes. He has not left his side since.

The pair have been tested to their limits mentally and physically, navigating across swamps and rivers using only inflatable pack rafts.

They encountered deadly electric eels, pit vipers, and Ed had a botfly burrow into his head, but he said the biggest dangers were from people.

Ed said the locals feared “gringos” – outsiders or foreigners – would harm them. “There’s a rumour about a mythical figure called Pela Cara, which means face peeler,” he said. 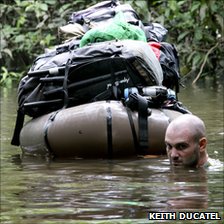 Ed admits he struggled with the mental pressures

“Locals believed white people would come and steal their babies and kill people in order to remove body parts and sell them.

“There were genuine looks of absolute terror when we arrived in communities.

“We arrived in Rieno Unido [in Peru] where a man had just gone missing, and because I was white… the village chief detained us.

“At one point we were in trouble because the Queen had not personally signed my passport.”

Ed and Cho were held in a hut for 24 hours before eventually being freed.

But their scariest moment came when they were chased by a gang of indigenous Ashaninkans wielding machetes, shotguns and bows and arrows.

• Went through three pairs of boots, four pairs of Crocs and two pairs of wellies

• Completed more than 6,000 miles when including distance forced inland by flooding

• Carried 48 hours worth of powdered anti-venom

“It was the only time I thought we were about to be killed,” Ed said.

“We had a radio and called ahead to the communities we were arriving at to say we meant no harm, but one said ‘if a white person comes through we will kill them immediately’.

They tried to circumnavigate the community using their rafts, but were chased by five or six boats full of Indians, who caught up with them on a sandbank.

“They ran towards us at high speed in a state of panic and aggression, if we had acted aggressively I have no doubt they would have killed us.

“They made us go back to their village at gun and arrow point and searched our belongings. They took one machete from us.”

Ed and Cho were allowed to leave after showing and explaining their electronic equipment to the tribe and agreeing to hire the tribe’s chief and his brother as guides.

“The chief ended up walking with us for 47 days… we became good mates,” Ed said.

Early in the expedition, the former soldier relied on local maps to navigate but, finding them unreliable and out of date, switched to sat nav. 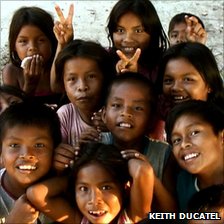 In Peru the team encountered a different community almost daily

They would sometimes navigate to places to restock supplies only to find the entire area, and communities within, cleared by deforestation.

On one occasion in Brazil, it set them back 11 days, forcing them to live off the land, foraging for palm hearts and fishing.

“We had to live off our wits. We found a couple of tortoises which we killed and ate, it’s sad but we were in a survival situation.”

Ed served four years in the Army, including a tour in Northern Ireland, but left in 2002.

After several years of expeditions – including to Borneo, Indonesia and Guatemala – he “wanted to push it a bit further”.

He admits his driving force was “quite egotistical” in wanting his name in the record books, but said he also had other motivations.

His father died of spleen and lung cancer and the trip has raised about £40,000 for Cancer Research, the ME Association and rainforest charities.

He has carried a portable satellite video phone and a laptop to regularly blog to schoolchildren and push his green message.

He said despite the burden of carrying extra weight in batteries, chargers and kit, the expedition would have been “meaningless” without sharing his experiences.

Ed says he has missed the company of women most during his time away and is looking forward to a game of rugby and meeting his four-month-old nephew, Archie.

“Two-and-a-half years is a long time to be away from my sister and mum… expeditions are a bit selfish, so I have a slight pang. I really want to get back now and give them some quality time,” he said.