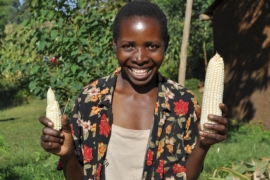 U.S. President Barack Obama’s administration has rolled out its “Feed the Future” initiative. The World Bank started a multi-donor trust fund for food security in April. Africa, with the world’s lowest crop yields and its greatest potential to produce food, will be the recipient of the majority of funding from both initiatives. While African governments will benefit from this funding, their most useful partner has gone largely unnoticed: Brazil.

In recent years, Brazil has quietly accelerated its foreign aid. It is also an agriculture powerhouse. As African governments try to facilitate a Green Revolution in Africa, Brazil is uniquely positioned to help.

Perhaps better than any other foreign power, Brazil understands the challenges that African governments will face as they try to ramp up crop production and to develop complex supply chains for agribusiness. Brazil’s farm industry is currently worth roughly $250 billion, and it accounts for about 35 percent of the country’s exports.

In the 1970s, however, Brazilian agriculture suffered from low yields and a lack of institutions to increase production.

Over the next 30 years, Brazil achieved tremendous yield increases in grains, sugarcane and dairy through targeted state investment. It started a research institution, Embrapa, which now has 41 centers across the country and a budget of over $1 billion. Embrapa claims that every dollar it has invested in technology development has produced $6.60 in returns for Brazilians. Brazil also invested in rural agriculture through Pronaf, a scheme that provides financing guarantees for equipment and encourages technology uptake.

African governments can learn much from these initiatives. First, agriculture development requires sustained investment over several decades. Brazil can show African leaders the wisdom of committing at least 10 percent of state budgets to agriculture, as they have promised to do, though few have followed through.

Second, Africa needs to invest in research institutions like Embrapa. In 2006, Embrapa opened an office in Accra, Ghana, to spread Brazilian agriculture technology across Africa. It already has nine projects in process, from helping Angola strengthen its agriculture research organization to helping Senegal develop its rice sector. These efforts should be increased, whether the funding comes from the Brazilian government, the World Bank, or the U.S. government.

Third, Africa cannot ignore its smallholder farmers. Over 80 percent of farming in Africa is done on small plots of lands. These farmers need technology that is adapted to their needs. Brazilian agronomists could advise African governments on rural extension services and technology adaptation.

Brazil is strongly interested in assisting Africa with its agriculture development. It is still a developing country itself, though, and while its foreign aid is rising, the need in Africa far exceeds what it can reasonably give. Western governments should direct some of their agriculture development aid through Embrapa, taking advantage of the institution’s accumulated expertise and talented staff. A new initiative called the Africa-Brazil Agriculture Innovation Marketplace brings together a group of donors, including the World Bank, to fund such projects. However, the initiative will only fund seven projects for a maximum of $80,000 each — a meager sum given the millions flowing to agriculture development in Africa.

In addition, Brazil should modestly increase its aid to Africa. This is not an altruistic move. Brazil will reap concrete benefits from assisting Africa with its agriculture development. The signature initiative of Brazil’s foreign policy is South-South cooperation. Working with Africa on agriculture shows the world that Brazil takes its rhetoric seriously.

Brazil also wants a permanent seat on the U.N. Security Council. Currying favor with African governments could help it build a coalition of supporters for that effort. This strategy has been successful for China, which has used its aid programs to build support among African governments in U.N. forums.

Finally, Brazil is the world’s largest producer of biofuels, but continued growth is contingent on the establishment of a global biofuels market. Currently, only the United States and Brazil produce and consume any significant quantity of ethanol. If Brazil facilitated the production of biofuels crops in Africa, it could lead to a more robust global market for ethanol.

A strong partnership between Brazil and Africa on agriculture development should be led by Brazilian President Luiz Inacio Lula da Silva. After stepping down from office this fall, Lula should start lobbying Western governments to channel some of their agriculture aid through Embrapa, and advising African governments on their agriculture policy strategy.

Lula knows Africa well — he has made nine trips to the continent during his eight years as president — and he is one of the world’s most charismatic heads of state. African leaders have pledged to allocate 10 percent of their budgets to agriculture development, but many have yet to follow through on their commitment.

If anyone can convince them that achieving economic prosperity requires a sustained commitment to agriculture spending, it’s Lula.

One Response to “Brazil can give Africa food security”