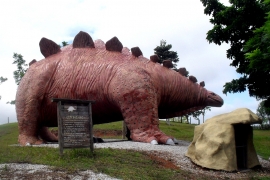 When he wasn’t smuggling cocaine or ordering hit men to gun down his enemies, Pablo Escobar liked to relax at Hacienda Napoles, his personal playground and petting zoo.

The 7,000-acre ranch included a private airport, dinosaur statues and 20 artificial lakes, as well as herds of elephants, zebras and hippos.

Today, 17 years after Escobar was gunned down, Hacienda Napoles has been turned into a tourist attraction. The site is home to a museum and a Jurassic-era theme park. Part of the property has been set aside for peasant farmers. And in a nice twist, a chunk of the estate houses a maximum security prison.

Hacienda Napoles represents a rare victory in the government’s campaign to seize the properties of drug lords and turn them into productive ventures.

Over the years, traffickers are believed to have acquired more than 9 million acres — representing about 8 percent of Colombia’s best grazing and farm lands. Because the properties were purchased to launder drug money, they often sat idle or were turned into private airports and golf courses.

All the while, legions of rural families were forced off their land amid Colombia’s ongoing guerrilla war and many have crowded into slums in Bogota and other cities.

These factors help explain why Colombia has one of the most unequal ratios of land distribution in Latin America. Government officials here have long advocated seizing drug lord properties and turning some of them over to landless peasants, but the task has proved frustrating and, in many cases, impossible. 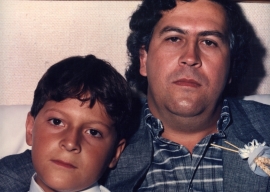 That’s because many of the traffickers’ assets — from farm land and condominiums to luxury vehicles and private jets — are registered in the names of friends and associates of the bad guys. These degrees of separation combined with Colombia’s slow legal system and multiple appeals by the defendants means that seizure cases are often tied up in court for more than a decade.

So far, the government has managed to expropriate only about 250,000 acres, less than 3 percent of the land thought to be held by traffickers. Of that amount, just 80,000 acres have been distributed to peasant farmers, according to Omar Figueroa, who heads the National Narcotics Department, the government agency that administers seized assets.

“Obviously, it’s not enough, given the demand for land in Colombia,” Figueroa said in an interview.

Even when properties of dead drug lords are targeted, expropriation can take a decade or more. Escobar was killed in 1993 but government  politics  was unable to secure the title to Hacienda Napoles until 2006.

Still, the projects on Escobar’s former estate offer a glimpse of the possibilities.

The mansion has been converted into a museum adorned with enlarged photographs of bomb attacks and somber funerals of politicians and presidential candidates assassinated by Escobar’s hired killers.

“This site does not glorify Pablo Escobar but what he did is part of our history,” said Oberdan Martinez, the administrator of the theme park and museum. “We are paying homage to his victims.” 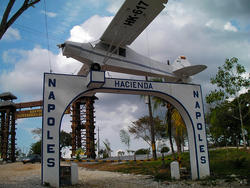 The park, run by a Medellin business group, attracted 65,000 visitors last year. Some of the profits go to the town government of Puerto Triunfo, a nearby community where Escobar used to hand out Christmas presents.

The dinosaur statues have been refurbished. Water slides and sound effects simulating the Jurassic period have been added to entertain children. Monkeys, toucans, geese, zebras, ostriches and flamingos populate the site while hippos still swim in the artificial lakes.

“This is spectacular,” said Roy Gomez, a tourist from Bogota, after feeding carrots to a baby hippo named Vanessa. “Escobar had to have a lot of money to buy all these wild beasts.”

About 200 acres have been handed out to former guerrillas and paramilitary gunmen, who disarmed in exchange for government benefits, as well as to families displaced by the war.

Some of them raise Tabasco peppers, which are sold to a local company that makes hot sauce. One of the rookie Tabasco growers is Robeiro Gomez, who spent six years fighting Marxist guerrillas and their civilian supporters as part of a paramilitary group.

“Working the land is the most honorable thing you can do,” Gomez said. He added that instead of contributing to the country’s violence, he’s now working for a good cause.

But while laudable, getting land into the hands of small farmers isn’t always enough. The Tabasco project was set up as a cooperative for 110 families yet only 16 families participate. That’s partly because finding dedicated farm workers is difficult in an area that’s long been dominated by the lucrative cocaine trade.

“The issue is money and physical labor,” said Paola Lozada, a psychologist who counsels co-op members, many of whom are still traumatized by the war. “Some people are not used to working eight hours under the sun.”

In the illegal drug business, she added, “they can make a lot more money in just two or three hours.”

A nearby cacao project has been more successful. Cacao, the raw material for chocolate, is easier to grow than chili peppers and due to rising demand, prices for the product are rising.

As he chops open a cacao pod and pries out the seeds, farmer Francisco Gomez says he’s never owned a square inch of land in his life. But he now grows seven acres of cacao. If the crop succeeds and they stay put, Gomez and his fellow cacao farmers will have the option to buy the land at a low price.

“I’m very happy,” Gomez said. “This is the inheritance that Pablo Escobar left for us.”