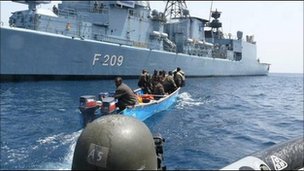 Eleven Somali men are sentenced to 10 years in jail in the Seychelles for piracy on the Indian ocean, in the country’s first case of its kind.

The ruling by the Supreme Court in Victoria is the first of its kind in the Indian Ocean nation.

In recent years, pirates have extended their reach further from the shores of East Africa.

A further 29 Somali men are awaiting trial for suspected piracy in the Seychelles.

Warships from around the world are patrolling the Indian Ocean in a bid to deter pirate attacks.

However, pirate suspects are routinely freed because of doubts about where they should face trial.

Eight of the men sentenced were convicted of piracy, and three others of aiding and abetting piracy, for trying to hijack the Topaz patrol boat, a statement from the Seychelles’ presidency said.

Four of them were less than 18 years old.

“Their conviction is a historical milestone as it is the first time that a piracy trial is successfully prosecuted in the Seychelles,” said the statement.

Last year, Somali pirates carried out more than 200 attacks, including 68 successful hijackings and receiving $50m (£32m) paid out in ransoms, according to unofficial figures – making it the most active year yet.

The Seychelles is the only coastal nation other than Kenya to have signed agreements with the European Union relating to the prosecution of piracy suspects.

It has warned that it has little space to accommodate new convicts, and last week passed a new law to make it easier to transfer detainees back to Somalia.

Last month, a court in the Netherlands jailed five men for piracy in the first such case in Europe.

However, some fear that transferring pirates to Europe for trial could lead to Somalis using that as a route to claim asylum.