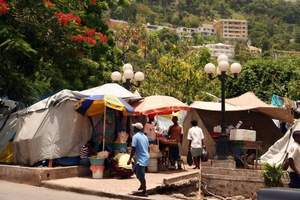 Luxury apartments in the hills above Place St Pierre overlook squalid tent camps. Below, a former sweatshop worker, Darline Charles, does her laundry. She says her family cannot afford to move to a new home costing $740 for half a year.

PORT-AU-PRINCE // In the colonial-style French restaurant on Place Boyer in Pétionville, the duck fillet in green pepper sauce costs US$23 (Dh84.5), an amount that could feed a hungry family for a week.

The restaurant is a hilltop refuge, perched above Haiti’s earthquake-ravaged capital. Here it is almost possible to forget about the hundreds of families living in the squalor of a tent city nearby, but for the stench rising from overflowing latrines and the noise of the children washing naked in the street.

The restaurateurs are beginning to complain: what is happening to the charm of their leafy suburb?

Pétionville, the home of Haiti’s wealthy elite, was mostly spared the damage that affected the rest of the capital, Port-au-Prince. Expensive villas were left standing while shoddily built slum housing was levelled. Now, tensions are rising as well-heeled residents grow horrified by the decline of their posh neighbourhood.

Six months after the magnitude-7 earthquake of January 12, Pétionville’s mayor, Claire Lydie Parent, wants to rid the most prestigious district of Port-au-Prince of the unwashed occupants from its European-style parks: Place Boyer and Place St Pierre.

“Every day she keeps on pressuring us to leave … but where will we go?” asked Darline Charles, 26, a mother of two young children, who lost her home and job in a clothing sweatshop and now endures the buzzing flies and screaming babies of Place St Pierre. 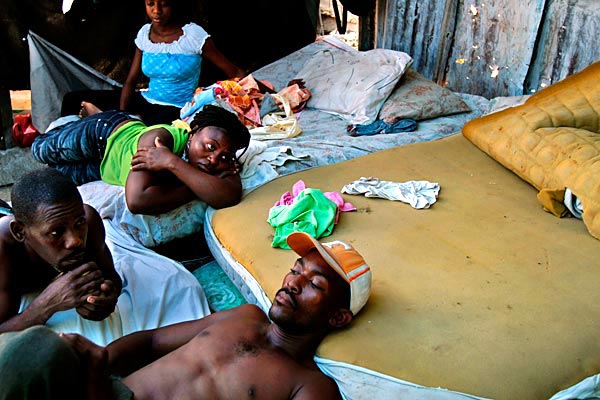 Some on Pétionville’s rich list lost homes and businesses, but many were immune to the quake’s wrath. The Galéries Rivoli boutique has noticed a 30-per-cent dip in sales of Gucci watches and Chanel No 5, but Ray Ban sunglasses remain as popular as ever.

Pétionville’s casino, health spas and discothèques are packed at the weekends with affluent Haitians, embassy workers and a post-quake influx of foreign aid workers. Waiters at the French-style Brasserie Quartier Latin and the chic Lebanese eatery, Magdoos, say business is booming.

“To me, life hasn’t changed,” said Michel Mahfoud, 30, the third-generation Lebanese owner of Magdoos, who says he “only lost a couple of wine glasses” in the quake and thankfully owns another restaurant back in Beirut.

“There are still people living in tents outside my business. My customers can’t park … but I’ve been doing good. I wouldn’t mind things being back to the way they were. It’s not a nice scene to be seeing every day – the showering, the toilets and everything. It’s terrible.”

Tent city dwellers say the mayor is sending gangs of tough men into Place St Pierre to smash down tarpaulin homes and harass them into leaving. They point to vacant plots that bear testament to evicted families.

Françoise Michel, the deputy mayor, denied knowledge of press gangs, but said a committee had been set up to find out why the tent city dwellers remained in Pétionville’s two leafy squares and whether they would move on soon.

“A public park is a public space. It’s for me, it’s for you, it’s for all citizens,” Ms Michel said. “So these people don’t have the right to occupy a public space. That’s why we are working hard and getting people out of the park because it’s the image of Pétionville that is suffering.”

Haiti’s wealth disparity is illustrated at the Pétionville Club, once the nine-hole “members only” course for moneyed golfers, which became the post-quake home to one of Port-au-Prince’s biggest camps. Some 50,000 residents live here.

Before the quake, more than half of all Haitians lived on less than $1.25 per day, 58 per cent of people lacked access to clean water and the average life expectancy was 61 years – lower even than in military-run Myanmar.

But a sliver of society lived in relative luxury, with ordinary Haitians complaining of the ethnic privileges enjoyed by mulattos, Middle Eastern immigrants and a tiny proportion from the black African-origin majority who had worked their way into the top tier.

Amany Abouzeid, a poverty expert for ActionAid International, said Haiti’s devastation from seismic ruptures six months ago was a symptom of the Caribbean nation’s problems rather than the cause of present suffering.

“The problem in Haiti is not the disaster. The problems with Haiti are structural inequalities, the fragility of the state, the lack of government structures and disparities among the Haitian population itself – with ethnic undertones to the disparities within the population,” she said.

Analysts point to the magnitude-8.8 earthquake in Chile in February – 500 times stronger than Haiti’s but responsible for 300 times fewer deaths. While Chile comes 28th on a list ranking nations by corruption levels, Haiti is 168th, according to the anti-graft watchdog Transparency International.

Development experts describe “fragile states” such as Haiti as existing in a “Catch-22” where society is trapped in cycles of poverty, corruption and exploitation. They point to the Haitian soldiers who impounded aid supplies on the tarmac of Port-au-Prince airport after the quake, men charging anxious family members $120 to dig out their buried loved ones and market traders who profit from wheelchairs and crutches intercepted from foreign charities. Even the UN’s blue tarpaulins fetch $18 on the streets of the capital. 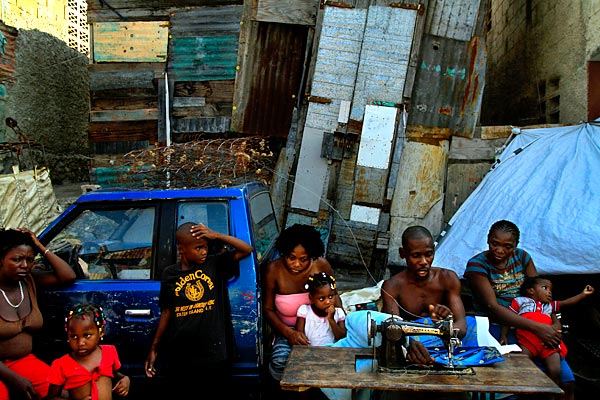 About 1.6 million Haitians continue living in tent cities from Pétionville to Port-au-Prince and the southern port town of Jacmel. Meanwhile the weakened government tackles a flawed land registry system, lost deeds and land shortages in the overcrowded capital.

Many are losing faith that Haiti’s worst disaster in centuries will serve as a catalyst to reboot a deeply flawed nation. They see as a pipe dream the “wholesale national renewal” that was promised when donor nations pledged $5.3 billion in New York in March for the first phase of a two-year reconstruction process.

“Shelter in Haiti is not a problem because the humanitarian community is not able to build transitional shelters – shelter is a problem because of the fundamental land rights issue,” said Ms Abouzeid, a London-based Egyptian. “No amount of expertise or money will solve a problem that is based in structural inequality, government inefficiency and government collusion with a political and economic elite.”