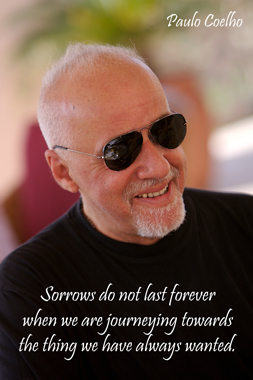 He is one of my favorite authors and in a episode we’re gonna take a quick look at some of my favorite Big Ideas from a few of his *great* books like “The Alchemist,” “Veronika Decides to Die,” and “The Warrior of the Light”!!

Good and Evil in Confrontation

Stories that contradict one another are worth telling once more. Ever since it began, the human race has been condemned to live in the eternal division between these two opposites. Here we are, with the same doubts as our forefathers, and without any more original answers to them.


Persia: Man As A Ally of Good

The first story about the division between Good and Evil comes from ancient Persia. The God of Time, having created the universe, sees harmony all around him, but feels that there is still something very important missing, a companion with whom to share all this beauty.

For a thousand years, he prays for a son. The story does not say to whom he prays, given that he is omnipotent, the sole, supreme Lord; nevertheless, he prays and finally he becomes pregnant.

When he realizes he has achieved his heart’s desire, the god of time is filled with remorse, suddenly conscious of how fragile the balance of things is. But it is too late and the child is already on its way. All he achieves by his lamentations is to cause the son he is carrying in his belly to divide into two.

The concerned father arranges everything so that Ormuzd will emerge first from his belly, to take charge of his brother and to prevent Ahriman from throwing the universe into confusion. However, Evil, being very intelligent and resourceful, manages to push Ormuzd aside at the moment of their birth, and thus is the first to be born.

Distraught, the god of time resolves to forge alliances on Ormuzd’s behalf; he brings into being the human race so that they can fight alongside Ormuzd and stop Ahriman from taking control of everything.

In the Persian legend, the human race is born to be the ally of Good and according to tradition, Good will triumph in the end. However, many centuries later, another story about Division emerges, this time presenting the opposite view; man as the instrument of Evil.

I imagine that most people will know this story. A man and a woman are in the Garden of Eden, enjoying every imaginable delight. But one thing is forbidden; the couple must never know the meaning of Good and Evil. The Lord God says, ‘But of the tree of the knowledge of good and evil, thou shalt not eat of it (Genesis 2:17)’ .

One day the serpent appears, swearing that this knowledge is more important than paradise itself and that they should possess that knowledge. The woman refuses, saying that God has threatened her with death, but the serpent assures her that nothing of the kind will happen. He assures her that quite the contrary will occur; for on the day they learn what Good and Evil are, they will become God’s equals.

Convinced, Eve eats of the forbidden fruit and gives some of it to Adam. From this moment on, the original balance of paradise is destroyed, and the pair is driven out of paradise and cursed.

In Biblical tradition, the human race is an accomplice of the evil that spreads over the planet. 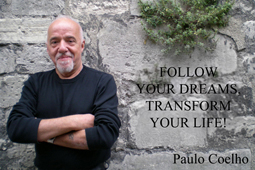 I have taken this story from Paulo Coelho’s blog – This story really touches my heart every time I read it.  I am sure once you have read it you will love it too.

A boy was watching his grandmother write a letter. At one point he asked:

‘Are you writing a story about what we’ve done? Is it a story about me?’
His grandmother stopped writing her letter and said to her grandson:
I am writing about you, actually, but more important than the words is the pencil I’m using. I hope you will be like this pencil when you grow up.’

Intrigued, the boy looked at the pencil. It didn’t seem very special.
‘But it’s just like any other pencil I’ve ever seen!’

‘That depends on how you look at things. It has five qualities which, if you manage to hang on them, will make you a person who is always at peace with the world.’

‘First quality: you are capable of great things, but you must never forget that there is a hand guiding your steps. We call that hand God, and He always guides us according to His will.’
‘Second quality: now and then, I have to stop writing and use a sharpner. That makes the pencil suffer a little, but afterwards, he’s much sharper. So you, too, must learn to bear certain pains and sorrows, because they will make you a better person.
‘Third quality: the pencil always allows us to use an eraser to rub out any mistakes. This means that correcting something we did is not necessarily a bad thing; it helps to keep us on the road to justice.’
‘Fourth quality: what really matters in a pencil is not its wooden exterior, but the graphite inside. So always pay attention to what is happening inside you.’
‘Finally, the pencil’s fifth quality: it always leaves a mark. in just the same way, you should know that everything you do in life will leave a mark, so try to be conscious of that in your every action’