Soldiers stand on a submarine found hidden in the Ecuadorian jungle. Officials say the vessel is the first of its kind capable of transporting drugs on transoceanic journeys. 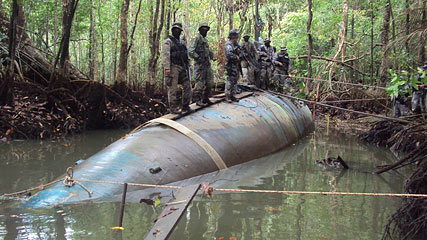 Law enforcement officials have already had to deal with drug traffickers using an increasing number of semi-submersible vessels, which just barely peeked above the surface of the water as they transported their illegal cargoes. Now the battle appears to have gotten even more difficult with the discovery of a fully functioning submarine capable of transoceanic transportation of drugs.

A tip from the U.S. Drug Enforcement Administration led authorities in Ecuador to a relatively sophisticated submarine hidden in the jungle near the border with Colombia. This submarine can go completely underwater, though it’s unclear what its exact capabilities are.

“It is the first fully functional, completely submersible submarine for transoceanic voyages that we have ever found,” said Jay Bergman, Andean regional director for the Drug Enforcement Administration, according to The Associated Press.

Semi-submersibles, often called “narco-subs,” are commonly used to transport cocaine and other drugs from South America. They have been held up as an example of the increasing sophistication of drug smuggling, but in reality these vessels are based on technology that dates back hundreds of years. They are often referred to as submarines but are typically diesel-powered, enclosed vessels that skim the water line.

That’s hardly state of the art.

For military and law enforcement, this latest development, though expected, is troubling. The DEA said the submarine had a periscope, a conning tower and an air-conditioning system. It could carry 10 metric tons of cargo, with room for a crew of five or six.

“This is in a new maritime drug-trafficking class of its own,” Bergman told the AP.

The semi-submersibles already are hard enough to spot. They are built in the jungle using metal and fiberglass. They may be up to 60 feet long and can often carry up to 10 tons of cocaine at ranges of up to 5,000 miles. It’s nearly impossible to detect them flying overhead, so authorities have focused on finding them during construction.

“There’s a large amount of jungle, triple canopy capability there,” Air Force Gen. Douglas Fraser, the head of U.S. Southern Command, told reporters this April. “Traffickers are able to use that to their benefit. In some cases, people say that in the mangrove swamps in western Colombia you can be 10 feet away from where somebody’s building a semi-submersible and never see it.”

Though narco-subs have been a growing trend over the past few years, military and law enforcement officials say they’re unsure whether they are getting better at spotting the smugglers. Fraser said 76 such subs were detected in 2008, and only 52 in 2009.

“I don’t know whether that means the trend has fallen off in the use of these vessels, or they’ve changed their tactics and we just didn’t see as many as we had the year before,” he said.