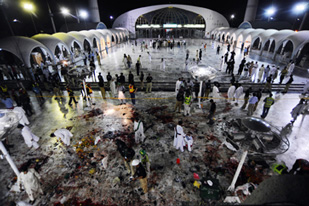 At least 41 people have been killed and hundreds injured after suicide attacks in the eastern Pakistani city of Lahore.

Police have confirmed that at least two suicide bombers blew themselves up at a Sufi shrine in the centre of the city, and officials say the cause of a third blast is still being investigated.

Sajjad Bhutta, a senior government official in Lahore, said thousands of people were visiting Data Darbar shrine, where the famous Sufi saint Syed Ali Hajwairi is buried, at the time of the attack.

“One attack took place at the gate of the shrine and two were in the basement,” Bhutta said.

The attackers struck in the evening when the shrine was at its busiest because of the cooler weather, prompting concerned relatives to rush to the scene in search of their loved ones.

Within hours of the blasts, demonstrators gathered outside the shrine, protesting the security lapse that allowed the attacks to occur. Police fired into the air and threw rocks to disperse the protesters. 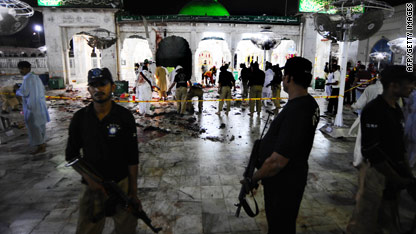 Lahore, the cultural capital of Pakistan’s Punjab province, has suffered from a string of attacks against its minority communities in recent months. More than 80 people were killed in twin attacks on the mosques of the minority Ahmadi sect in May.

Al Jazeera’s Imran Khan, reporting from the capital Islamabad said that the blasts fitted the pattern of previous attacks that have targeted religious sites at busy times.

“This happened at a shrine for a Sufi saint. This is a very popular tourist attraction and at this time of night it would have been packed,” he said.

“This is yet another blow for the city of Lahore. These bombings are further proof that there is only so much you can do to protect yourself. If someone is determined to blow themselves up, they will do it.”

Doctors said they were expecting the death toll to rise, as the city’s main hospital declared a state of emergency.

There has been no claim of responsibility for the attack, but previous bombings in Lahore have been blamed on the Pakistani Taliban, who disagree with minority interpretations of Islam, including Sufism.

The Pakistani government has been criticized for failing to crack down on militants in Punjab, many of whom are part of now-banned groups that started with government support in the 1980s and ’90s to fight the Soviets in Afghanistan and pressure archenemy India.

Many of these groups have formed links with the Pakistani Taliban, which has recruited militants to carry out attacks in parts of Pakistan far from its sanctuary in the northwest near Afghanistan.