“We are definitely hearing more and more horrific stories and are interviewing victims who tell us about young girls being gang-raped during the conflict and even these days.”

About 400,000 minority Uzbeks fleeing mobs of Kyrgyz massed at the border , an Uzbek leader said, as the deadliest ethnic violence to hit this Central Asian nation in 20 years left a major city smoldering.

Fires raged for a fourth day in the southern city of Osh, three miles (five kilometers) from the border with Uzbekistan. The real death toll may be 10 times  the 191 dead and nearly 1,800 injured since the violence began last week one leader says  the death toll over 2000,  an Uzbek community leader said at least 200 Uzbeks had already been buried, and the Red Cross said its delegates saw about 100 bodies being buried in just one cemetery.

The United States and Russia, which both have military bases in Kyrgyzstan away from the violence, worked on humanitarian aid airlifts, as did the United Nations. Neighboring Uzbekistan hastily set up camps to handle the flood of hungry, frightened refugees. Most were women, children and the elderly, many of whom Uzbekistan said had gunshot wounds.

The interim government, which took over when former President Kurmanbek Bakiyev was ousted in an April uprising, has been unable to stop the violence and accused Bakiyev’s family of instigating it to halt a June 27 referendum on a new constitution. Uzbeks, who are a minority in Kyrgyzstan as a whole but whose numbers rival the Kyrgyz in the south of the country, have backed the interim government. Many Kyrgyz in the south have supported Bakiyev.

Kyrgyz security chief Kenishbek Duishebayev said Monday evening on television that Bakiyev’s younger son, Maxim, was arrested earlier in the day in Britain when he flew into a Hampshire airport on a leased private plane.

Prosecutors, who placed him on an international wanted list in May, alleged that companies he owned avoided almost $80 million in taxes on aviation fuel sold to suppliers of the U.S. air base.

The violent protests that led to President Bakiyev’s ouster were fed by anger over corruption permeating his extended family, which grew wealthy and powerful under his rule. The new government has been under pressure to bring them to justice. 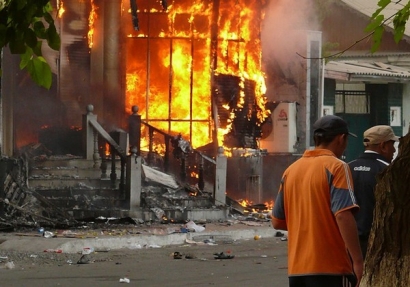 The government said earlier Monday it had arrested a “well-known person” suspected of stoking the violence, but gave no other details. Suspects from Tajikistan, Afghanistan and Kyrgyzstan were also detained and claimed to have been hired by supporters of Bakiyev, government spokesman Farid Niyazov said.

It now appears unlikely this month’s referendum will take place. New parliamentary elections are scheduled for October, but the violence appears aimed at undermining the interim government before then.

From his self-imposed exile in Belarus, Bakiyev has denied any role in the violence. Speaking to reporters Monday, he again blamed the interim government for not preventing the rioting and called on the Moscow-dominated Collective Security Treaty Organization to send in troops. The new Kyrgyz government asked Russia to send troops, but the Kremlin turned down the request.

Jallahitdin Jalilatdinov, who heads the Uzbek National Center, told The Associated Press on Monday that at least 100,000 Uzbeks were awaiting entry into Uzbekistan, while another 80,000 had crossed the border. The Uzbek government said 45,000 had already been registered.

Shaken refugees claimed that many Uzbek girls had been raped and that Kyrgyz snipers had shot at them from the hills as they rushed toward the border.

U.N. High Commissioner for Human Rights Navi Pillay expressed alarm at the violence and urged the authorities to protect all citizens irrespective of their ethnicity.

“It seems indiscriminate killings, including of children, and rapes have been taking place on the basis of ethnicity,” Pillay said in a statement.

“This is a very dangerous situation, given the ethnic patchwork in this part of Kyrgyzstan, as well as in neighboring areas of Uzbekistan,” she said. “It has been known for many years that this region is a potential tinder box, and for that reason it is essential that the authorities act firmly to halt the fighting – which appears to be orchestrated, targeted and well-planned – before it spreads further inside Kyrgyzstan or even across the border into neighboring countries.” 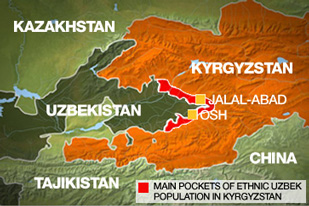 The fertile Ferghana Valley, where Osh and Jalal-Abad are located, once belonged to a single feudal lord, but was split by Soviet dictator Josef Stalin among Uzbekistan, Kyrgyzstan and Tajikistan, rekindling old rivalries.

In 1990, hundreds were killed in a land dispute between Kyrgyz and Uzbeks in Osh, Kyrgyzstan’s second-largest city, and only the quick deployment of Soviet troops quelled the fighting. A year later, the Soviet Union collapsed, and new tensions rose between Uzbekistan and Kyrgyzstan over distribution of irrigation water, natural gas and electricity.

Uzbeks make up 15 percent of Kyrgyzstan’s 5 million people and are generally better off economically, but they have few representatives in power and have pushed for broader political and cultural rights. Both ethnic groups are predominantly Sunni Muslim.

Few police or troops were seen on the streets of Osh, a city of 250,000. Food and water were scarce after armed looters smashed stores, stealing everything from TVs to food. Cars stolen from ethnic Uzbeks raced around the city, most crowded with young Kyrgyz wielding sharpened sticks, axes and metal rods.

In the mainly Uzbek district of Aravanskoe, an area formerly brimming with shops and restaurants, whole streets were burned to the ground. In one still-smoldering building, an AP photographer saw three charred bodies.

Hundreds gathered at Osh’s central square to get on buses for the airport. Gunmen have made the road from the city to the airport too dangerous to tackle alone.

“The entire city is in the state of panic – you see for yourselves – because all people have children,” said resident Galina Nikolayevna.

Mukaddas Jamolova, 54, from Kara-Su, near Osh, said she saw looters burn down many Uzbek homes. She said her house was not burned down but the family can’t flee to Uzbekistan as they fear armed attackers.

In another city beset by violence, Jalal-Abad, 25 miles (40 kilometers) from Osh, armed Kyrgyz massed at the central square to hunt down an Uzbek community leader who they blame for starting the trouble.

In the village of Sura-Tash, ethnic Uzbeks converted a mosque into a makeshift hospital. Using rudimentary supplies, health workers treated anyone who came in with wounds from beatings or ordinary conditions such as heat exhaustion and diabetes.

Some sought shade in the mosque, but hundreds were forced to wait outside in the sun.

Vodka was used to sterilize medical equipment and powdered plaster was melted down to turn into casts for broken limbs.

One doctor said those who attacked the Uzbeks seemed to have the support of the Kyrgyz military.

“Many people have died, snipers fired from more than one kilometer away, and organized gangs followed the military as they drove in with armored personnel carriers,” said Dr. Lutsalla Khakimov, who was working at the mosque. “This was organized, they wanted to start a war.”

Some victims said they had been raped. 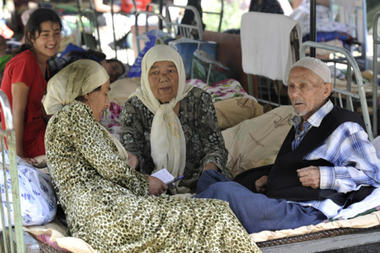 Uzbek refugees who fled from Kyrgyzstan rest on a bed in a refugee camp on the border near the Uzbek village of Jalal-Kuduk, Monday, June 14, 2010. Some 100,000 minority Uzbeks fleeing a purge by mobs of Kyrgyz massed at the border Monday, an Uzbek leader said, as the deadliest ethnic violence to hit this Central Asian nation in decades left a major city smoldering.

As the clashes continued, desperately needed aid began trickling into the south. Several planes arrived at Osh’s airport with tons of medical supplies from the World Health Organization. Trucks carried supplies into the city with an armed escort.

The U.S. had a shipment of tents, cots and medical supplies ready to fly to Osh from its Manas air base in Bishkek, the U.S. Embassy said.

The U.S. and Russia military bases are in northern Kyrgyzstan, away from the rioting. Russia sent in an extra battalion to protect its air base. The U.S. Manas air base is a crucial supply hub for the coalition fighting the Taliban in Afghanistan.