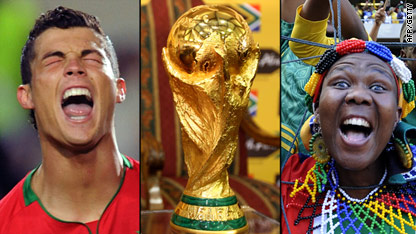 * Thirty-two teams compete for football’s ultimate prize for the first time on African soil
* South Africa will be hoping to avoid being first host nation to crash out at group stage
* Offside is arguably the rule most likely to infuriate players, managers and fans alike
* World’s greatest player, Lionel Messi, will hope to reproduce club form for Argentina

While the World Cup in South Africa is manna from heaven for soccer fans, spare a thought for those who regard “the beautiful game” as a confusing sport with complicated rules and impenetrable jargon.

For those of you who fall into this category and fear being caught short during a water-cooler moment at the office, CNN has put together a bluffer’s guide to the round-ball game and the World Cup.

Phrases to impress your boss

“The referee’s blind!”
An excellent phrase to insert when those around you lament a goal that “never was,” a clear handball or a murderous foul not spotted by the official.

“There’s a case for video technology”
Following your previous observation about the referee’s eyesight, join the calls for video replays to help him make the right decision.

He’s got two left feet”
As frustration grows with one hapless player in particular, make sure you aren’t left out.

“He missed a sitter!”
When a player misses an easy chance to score.

“It was a blatant dive!”
When a player tumbles to the ground rolling around in apparent agony even though there was no contact from an opposing player.

“Germany are always so efficient”
No fuss, no frills but a victory nevertheless — only to be used if Germany wins a match.

“Can England repeat 1966?”
Use if your boss is an England fan. It’s the only time England ever won the World Cup and the fans there never let you forget it. 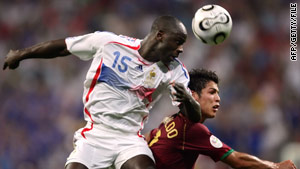 1. Offside
The rule most likely to infuriate players, managers and fans alike. A player is deemed to be in an offside position when he is in his opponents’ half of the pitch and further forward than the last opposition player at the moment a teammate attempts to play a pass to him. Sounds simple, right? When this happens, the opposition wins possession of the ball. All straightforward until your team is denied what looks to be goal by a poor decision by the assistant referee on the touchline. Stand by for plenty of offside flash points and some colorful language.

2. Free-kicks
When a player is penalized for committing a foul, handball or offside, a “free and unchallenged” kick of the ball is awarded to the opposition. Try not to foul a player near your goal because a sharp-shooter like Portugal’s Cristiano Ronaldo will send the ball crashing into the top corner of the net with deadly precision.

3. Penalties
Another type of free-kick awarded when a player is fouled inside the 18-yard area around an opponent’s goal. The fouled player, or teammate of that player, is then allowed to take a shot from a white spot 12 yards (around 11 meters) from the goal. Prepare yourself for contrasting views from football fans, often less than complimentary about the referee, when a penalty is awarded. This is also the way to decided drawn matches in the later stages of the tournament when you can also liberally use the phrase “nail biting”.

3. Red and yellow cards
Yellow cards are shown to a player by the referee after a particularly nasty foul or if they question his decision in a less than polite manner. A second offense by that player usually leads to a second yellow card, which automatically becomes red and means an “early bath”. Straight red cards mean a player has been particularly naughty and can expect a day off when the next match comes around. 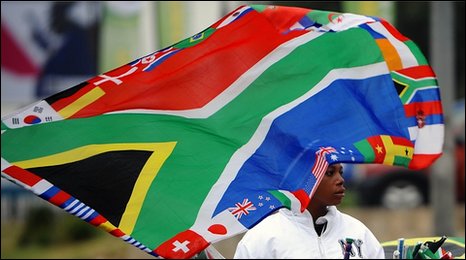 Heads up: A good jump, eyes open and the opponent wondering where the ball is

1. Square ball
Refers not to another controversial ball design, but rather a simple pass of the ball sideways to a teammate.

2. Through-ball
When a player passes the ball forward past two or more defenders to a teammate, usually a striker, who is in position to run through on goal to score.

3. Cross
Nothing religious, it refers to the delivery of the ball, either in the air, or along the ground, from either side of the pitch towards the opponent’s goal for a teammate.

4. Dribble
Funnily enough this is a skilful technique where a player runs past opponents with the ball apparently glued to his feet. Watch Argentina star Lionel Messi for a master class.

5. Header
As you would expect. For the best players, the head is as good as their feet. The hardest part of the skull is the forehead so use that for maximum power.

6. Volley
Kicking the ball when it’s reached you in the air, like in tennis. This is a technique which can lead to spectacular goals or derisive cheers from fans if the ball ends up in “row Z” of the stand.

7. Tackle
Taking the ball off an opponent, robbing him of the ball and often leaving him on his backside.

8. Foul
A tackle where you usually hack away at the opponent’s feet first before running off the with ball. Not allowed.

9. Professional foul
A pre-meditated foul, usually a last-ditch desperate act to stop an almost certain goal. The methods have become sophisticated though so it often takes a sharp-eyed referee to make the right call. A professional foul will often lead to a red card (see above).

10. Man-marking
Nothing like as serious as it sounds. Man-marking is when a player shadows an opponent to crowd him out and give him no space to run with the ball or pass it. Some players will hold or grab any part of their opponent’s anatomy to hinder their progress. 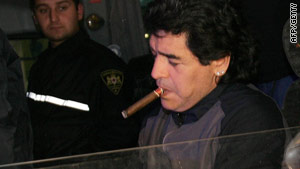 How to impress your boss if he’s English: Make great mention of 1966 and the nation’s only World Cup win

1. Group of death
With each of the 32 teams split into eight mini-leagues, the competition to qualify for the knockout stages is fierce. Some groups are so tough that a fancied team is bound to fail. For example, five-time winners Brazil, the elegant Portuguese and a talented Ivory Coast side are all in one group.

2. Brazilian flair
Football may have started in England, but it was made sexy by Brazil. Since the days of the great Pele, Brazil’s yellow-shirted national team has thrilled fans the world over with the swagger and individual brilliance of players that often grew up playing on the beaches of Rio de Janeiro.

Who will be the World Cup’s best player?

3. Total football
A football philosophy developed by the Dutch in the 1970s in which every outfield player is able to play in the position of any of his teammates. According to football aficionados, this makes the team structure completely fluid, adaptable and ultimately difficult to play against. It nearly worked for the Netherlands, but not quite.

4. Route one
The antithesis of Brazilian flair. It usually involves a more “industrial” method of kicking long aerial passes from defense to big, physical players in attack. Not pretty but it can be very effective.

5. Playmaker
The creative player in the team that makes it tick. Italians refer to this key attacking position as “il Fantasista.”

6. Hand of God
England and Diego Armando Maradona may face each other again more than two decades since the Argentine superstar famously scored with his hand against the English at Mexico in 1986. After the game, Maradona said the goal was scored “a little with the head of Maradona and a little with the hand of God.”

World Cup moments not to miss

l. Brazil
Obviously! The mighty Brazilians could probably field two teams, such is the depth of talent available to them. Unfortunately the slightly rotund but prodigiously-talented Ronaldinho has been left out of the squad. However, the team still boasts a mouth-watering array of talented players such as attacking midfielder Kaka, striker Robinho, and the super-fit defender Dani Alves of Barcelona.

Who will win the World Cup?

2. Diego Maradona
The cigar-smoking footballer turned coach is a god in his native Argentina. He lifted the trophy as a player in 1986, was banned from the competition for doping in 1994, and suffered with drug and alcohol problems after he retired. A troubled figure, Maradona is compulsive viewing nonetheless.

As manager of Argentina’s national team he has arguably the strongest squad in the competition, though critics point to a turbulent qualifying campaign as proof that he cannot mould them into a winning team. Expect interesting press conferences.

3. Lionel Messi
Considered the world’s greatest player, the diminutive Argentine is viewed by many as the next Maradona. However he has yet to reproduce his extraordinary club form with Barcelona for his national team. Capable of beating entire teams on his own, he could easily disappoint if the rest of team play as poorly as they did trying to qualify for South Africa.

4. Wayne Rooney
England’s World Cup hopes rest on the stocky Manchester United striker whose temper has been his biggest enemy in the past. Rooney’s last World Cup ended with one of those red cards after his boot made firm contact with the groin of a Portuguese player. Since then he has become a father and family life is said to have mellowed him.

5. South Africa
Though their form has improved dramatically in the last six months, they could face the ignominy of becoming the first host country to fail to qualify from the group stage. The tournament needs “Bafana Bafana” to make progress from a group that includes Mexico, Uruguay and France to keep this football-mad nation at fever pitch.