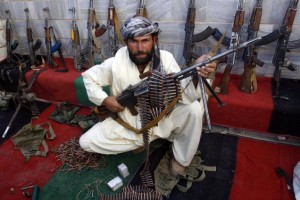 In the worst of several attacks, five US soldiers died in an improvised bomb blast in east Afghanistan, the US said.

Five other Nato troops were killed in a spate of attacks across the country’s restive South and East, where Isaf is battling the Taliban.

The militants have been waging a battle to overthrow the US-backed government.

The UK Ministry of Defence said no British troops were killed in Monday’s attacks.

Taliban talks?The deaths come as the last of 35,000 extra troops ordered by US President Barack Obama arrives in the country. 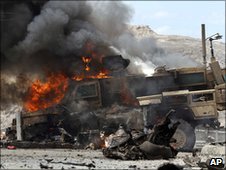 They are preparing for a major operation in the southern province of Kandahar – the heart of the Taliban insurgency – later this summer, says the BBC’s Martin Patience in Kabul.

But with the casualty rate rising, public support for the campaign is waning, our correspondent adds. Some, both in Europe and the US, are wondering whether the fight against the Taliban is sustainable.

There are currently around 94,000 US troops in Afghanistan, and that number is expected to reach around 100,000 in line with Mr Obama’s pledge to step up the anti-Taliban offensive. Nato allies contribute another 47,000 soldiers.

A plan by Afghan President Hamid Karzai to enter into peace talks with the Taliban received the backing of tribal leaders at a three-day meeting in Kabul last week.

But the group has said in the past it would only negotiate with the government once foreign troops had left the country.

Alongside this push for peace in the country, our correspondent says, the US military believes it has to get on the front foot in defeating the insurgency, increasing the pressure on the Taliban to come to the negotiating table.

Nato troops first fought in Afghanistan shortly after the September 2001 attacks on New York and Washington.