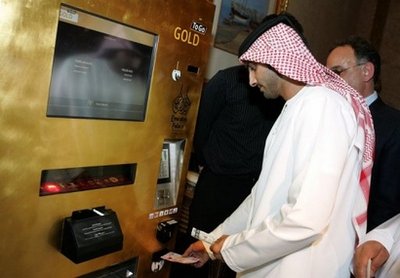 ABU DHABI (AFP) – There’s no mistaking what’s in this vending machine. The well-heeled in the Gulf can now grab “gold to go” from a hotel lobby in the United Arab Emirates, when the need for a quick ingot strikes.

On Thursday, a day after its inauguration, the shiny machine attracted spectators of many different nationalities who gathered to watch whenever an enthusiast was struck with the urge to splurge on a bar of the precious metal.

“In addition to one-gram, five-gram and 10-gram bars of gold, the machine also dispenses gold coins,” it added.

Gold rates are constantly updated inside the shiny machine — itself gold-plated — in the hotel’s lobby, courtesy of a built-in computer connected to a dealer which sells gold online.

Hotel general manager Hans Olbertz said they wanted the hotel to be the first in the world to offer guests what he called “this golden service.”

The Emirates Palace is often used by visiting foreign dignitaries, and its top floor is reserved for the rulers of the UAE federation’s seven emirates, each of whom has his own suite.