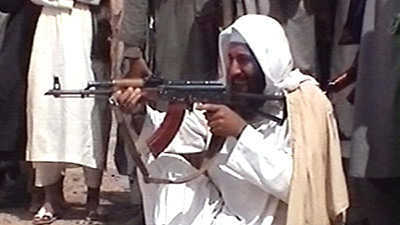 Al Qaeda leader Osama bin Laden – the world’s most wanted man – is alive and well and living in Iran, according to a documentary.

HE has given up the caves of Afghanistan or – as more recently believed – Pakistan, and is now living under the protection of Iran’s Revolutionary Guard, it is claimed.

Bin Laden, his wife and family have been in the Islamic republic since 2003, the Feathered Cocaine documentary on Fox News alleges.

The film is about one of the world’s leading falconers, Alan Parrot, who says he knows all about bin Laden through the world of falconry.

The sport is hugely popular in the Middle East, with the best birds selling for more than £700,000 to the region’s richest and most influential people.

These same people conduct business while on hunting forays and, according to Mr Parrot, that was how he came to learn about bin Laden’s whereabouts.

The contact, described as a warlord from northern Iran, says he has met bin Laden six times since March 2003 on hunting trips inside Iran.

The man adds that bin Laden is “relaxed and healthy” and travels around with only four bodyguards.

The warlord, Mr Parrot explains, only agreed to talk because one of the falconer’s men had saved his life. “This was his repayment. He was asked to talk. He wasn’t happy about it.”

The last meeting with bin Laden that he knew about was in 2008, Mr Parrot says.

“There may have been more since then, but I haven’t talked to my source since we left Iran,” the falconer adds.