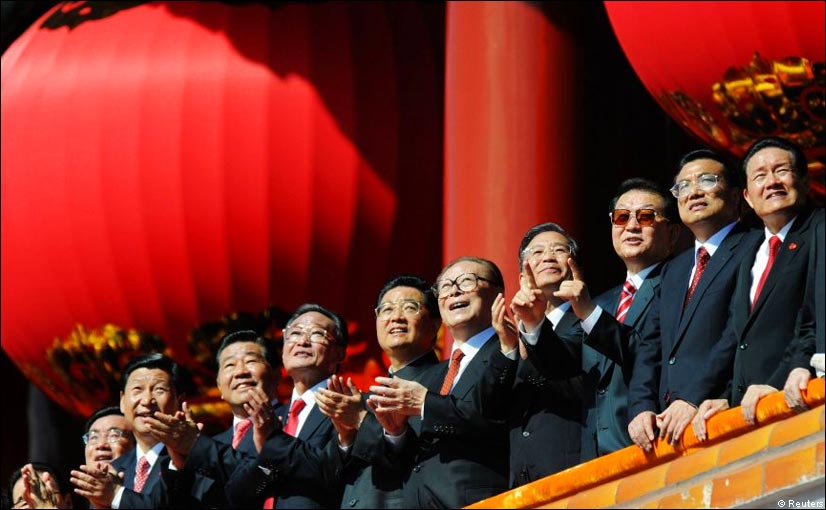 The basis of human rights is fairness of the law, granting people freedom of action – of which the right to free expression is one part. This idea makes it even harder to approach the issue of human rights in China, as it is not simply the issue of dissidents voicing their opposition, it is also an issue ingrained in the very structure of the exercise of power in China.

If you have been to China for more than a short vacation, say more than a month, in the past 15 years, you will have certainly encountered what most Chinese people also experience for a

great part of their daily lives – the wall of a legal system that it is at times insurmountable and at others easy to bypass.

If you want to do anything that a normal middle-class person does routinely in his or her life, from building your own house
to buying a car, you have to factor in from a few days to several months of legal procedures. The time varies on the whim of the official, your ability to move within or outside the system, and your willingness to bend or ignore the law. But most importantly, regulations change, are too many, and are too cumbersome to apply, and so the best way to go about anything is get guanxi, the complex word that is part of the Chinese soul and can be loosely translated as “connections”, but with deeper meaning and stronger roots.

Yet “connections” are by their nature outside the law, and moreover warp the levelness of the playing field and affect the healthy development of the market – the basis of the economic development of China or, for that matter, anywhere else in the world. Still connections are part of the Chinese way of life; it is unconceivable to do without them. But how can one reconcile “connections” with fairness?

Perhaps we should consider things from another angle.

Roman law held one principle: law must be easy to respect – if most people contravene the law the problem is not with the people but with the law.

There is a practical reason behind this principle. If most people contravene the law the officials in charge of enforcing it will have to fight the majority, which is always very difficult. In this fight, a minority of officials will struggle against a mounting tide, and the majority of officials will choose the easier path of turning a blind eye – either for free or for a reward. This creates corruption and raises the tide against the law.

In making laws, then, one has to reconcile the policy that leaders want to achieve with current customs and the legacy of the survival instinct in human nature. Otherwise not only will the laws be impossible to enforce, they will create corruption and social and political turmoil. Ancient Romans, in other words, were already clear about the idea of unintentional consequences of intentional human actions and believed lawmakers should consider this principle and possibly choose the easier path.

Lawmaking then is extremely difficult. This is true in normal circumstances, but even more so in times of great flux. What was true (ie, approved by most people) yesterday is no longer true today. This is happening in China, which also faces the systemic problem of trying to regulate a formerly anarchic situation.

In the 1980s, Deng Xiaoping opened the door to reforms by allowing people to strive for themselves and find ways of getting rich. There were no rules, and what was legal or illegal was a thin line that depended on your luck, on who you could call your friends or enemies, and on the general circumstances.

The situation was a jungle, chaotic, and rules could change from one day to the next. There was deep-seated corruption. Officials often used their power not as a service to the community or as an opportunity to rise up the hierarchical ladder, but rather they saw it as a currency to invest in projects and exchange for cash
. Direct alignment of the interests of officials with those of entrepreneurs
gave both something concrete to strive for in the reforms; so then reforms and change went into overdrive.

Since the second half of the 1990s, the way to limit the entrepreneurial interpretation of power was to constrain it with rules, but they soon became too many and too strict. This makes things grow very cumbersome because the world changes and circumstances vary, but laws are not flexible enough.

It creates a situation in which laws are perfunctorily observed. In fact, it is more troublesome to observe the law than to ignore it. In these circumstances, laws become a tool applied based on political preferences or interests. This may be fundamentally true of all legal systems in which the role of the judge or of the official enforcing the law is very strong. But in China this is combined with the entrepreneurial spirit of the people (who are also officials) who have moved and reshaped the country over the past 30 years. This then translates into possible corruption of officials.

The overall environment is gray at best. Many officials believe their careers are some kind of business opportunity, while businessmen prowl around looking for the right official to buy off. This was historically the case in China for many centuries after all, when people tried to get rich to buy the favors of an official or support the education of their children so the children could become officials and protect the family business.

But this pattern strangles competition in the market and creates a competition for political favors. This situation in turn favors not the best or most efficient company, but the most cunning, the one with the best access to power.

What to do? One important part of the answer, even if it is not all of it, is openness: rules must be clear and well known to everybody. But also simplification: you have to have rules (unlike the 1980s) but also not too many (unlike the present trend). Fewer, but clearer, laws are needed that will take into account future trends. This is easy to say, but very difficult to do, as you also want legal uniformity across vastly different regions and in a country where changes are incredibly fast-paced and radical.

More than that – and it is already starting to happen – China must disalign to a certain degree the direct interests of officials and entrepreneurs. This is occurring with the introduction of a system of positive incentives for honest officials (not only the disincentives of harsh punishments).

Your promotion, moving up the ladder of increasing power, will be judged based on the performance of your county, your city, your province and the fact that you have not taken bribes. So there is an objective interest in staying honest and letting business thrive. In reality, this works for a minority of officials, the ones who get promoted. The majority of officials, who stay put with no intention of climbing the ladder, have an objective interest in the contrary – making money while they can and while they are still in power, because soon they will be kicked out anyway.

Those people then should simply not be there, as they pollute the efficiency of the state and provide a disservice to the state and the public. The real issue is streamlining the bureaucracy and procedures. The result would be that the state manages less and manages better.

This streamline reform would be a massive change in China and a great leap forward in the development of democracy and human rights. Yet without it, the objective interests of a great number of officials in China will conflict with the larger interests of the state and of the ruling party. And those officials will spawn corruption and hatred from the common people, and thus ultimately bring down the state and the party.

Meanwhile, waiting for those massive changes, what to do? Struggle to survive, to improve the situation in small steps, and ignore the law if you can and when you can – as most Chinese do in their everyday lives.