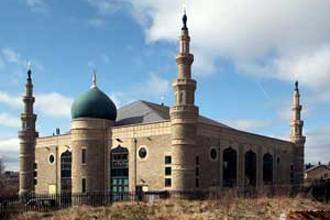 Bradford’s Madni mosque, in northern England, has beaten 50 others to win the title of “Europe’s most beautiful minaret,” the European parliament was told Tuesday.

The mosque in Bradford, which has a large Muslim population, was only inaugurated in 2008.

Its four minarets won the prize from a shortlist including mosques in Stockholm, Rome. Oslo and Granada in Spain, said the prize organizers COJEP international, a youth charity started by Turkish immigrants in France, which is a partner of the OSCE and the Council of Europe.

A “multiconfessional, multiethnic,” jury, including a Jewish rabbi, a Swiss protestant theologian and an Anglican priest, looked in total at 53 minarets in 13 countries before making their choice.

Only those under 50 years of age were eligible for the contest “we refused all ‘historic’ minarets like those in Andalucía, Bosnia or Paris because we wanted the competition to remain linked to recent Islamic immigration,” said COJEP spokesman Veysel Filiz.

The jury made their decision on the basis on aesthetic considerations but also the way the minaret works in the urban environment it is built into.

“The idea of the competition was to show that minarets shouldn’t be vehicles of fear and prejudice,” said Filiz.

Mosques should be visible from afar “because Islam in Europe must function in a transparent fashion and the mosques be open to society.