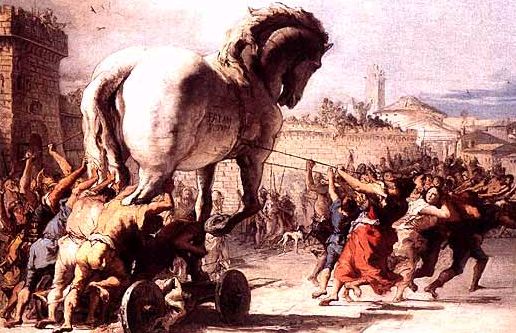 People thinking in strategic terms about the monetization of digital medias, publishers, marketers, are unanimous. Collecting and poring over data has become more important than ever.
That’s one trend.

The other involves the gatekeepers.
As I briefly explained last week, we now face a small club of high tech giants — Google, Microsoft, Amazon, Yahoo and Apple — who, over the years, acquired an unprecedented ability to gather and process data. As competition is heating up among them, the data they’ll be able to get will continue to increase in tactical and strategical value. As a corollary, they are increasingly inclined to keep such data close to the vest.

The latest example came up with the April 8th launch of Apple’s iAd initiative for the iPhone platform. As Steve Jobs delicately puts it, mobile ads “suck”, his own words for what we’ve been saying all along in the Monday Note (see The future of content navigation). Digital ads suffers from an inherent flaw: they are designed to take the viewer away from the content (again: see Jobs’ keynote speech for details, go directly to the 44 minutes mark to watch the ad chapter). Hence the solution envisioned by the Cupertino boys: embedding the ad within the application – which, in the process, becomes the commercial Trojan Horse of mobile computing. Next step: connecting the ad to a transaction system that will collect a 40% commission fee.

Take location data, for instance. Using a combination of GPS, cell-tower and wifi triangulations, every mobile phone user can be tracked in real time. To get an idea, go to this Skyhook Wireless demo, or this video made by Sense Network, which shows the movement patterns of people aggregated in social “tribes”. At the carrier level, this can even be done in a nominative way, thanks to the electronic serial number broadcasted by the phone. Of course, what raises serious privacy concerns, also causes the marketing community to drool. Hence the level of frustration triggered by Apple’s restrictions. Without the ability to use some anonymized datasets, placing ads in an iPhone app loses its appeal. Advertisers will be reluctant to go back to the shot-in-the-dark system that prevailed in print.