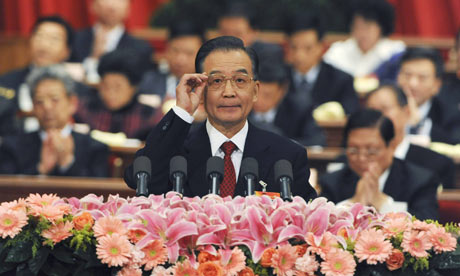 Although China has become an economic powerhouse, its politicians have so far failed to articulate any larger global vision

China’s premier Wen Jiabao. He and other leaders have said little the country’s role about the international political system.

China’s willingness to join negotiations on potential sanctions against Iran and to send President Hu Jintao to a nuclear security summit in Washington this month are important preliminary steps towards taking more responsibility in managing international affairs. But merely joining conversations or showing up for meetings is not enough. Given its growing profile, China must do far more to demonstrate its bona fides as a responsible global leader or risk undermining the system that has enabled its own miraculous rise.

China has emerged as a world power far more quickly than most observers – and China’s own leaders – might have predicted as little as a decade ago. China’s rapid economic growth, juxtaposed against America’s problems in Iraq and Afghanistan, monumental debt and role in sparking the global financial crisis, have changed global power realities – and global perceptions of those realities even more. China’s current international influence likely outstrips its desire or capacity.

This puts China in a difficult position in relation to the so-called international system – the structures and rules created by the United States and others after the second world war to check national sovereignty through a system of overlapping jurisdictions, transnational obligations, and fundamental rights. China has been an enormous beneficiary of this system, and its rise would have been unthinkable without the US-led free-trade system and globalisation process, access to US markets and global shipping lanes secured by the US Navy. But China’s history of humiliation at the hands of European colonial powers has made its leaders ardent supporters of inviolable national rights and suspicious of any sacrifice of sovereignty.

Because China’s leaders are not popularly elected, their legitimacy stems largely from two sources – their connection to the Chinese revolution and their ability to deliver national security and economic growth. Although Mao Zedong is widely implicated in the unnecessary death of millions and is officially designated by the current regime as having been 30% wrong, his photograph still adorns Tiananmen Square because the regime’s legitimacy depends in part on its connection to the restoration of national sovereignty that Mao represents.

The economic foundation of the Chinese government’s legitimacy also places an enormous burden on China’s leaders to make decisions that foster domestic economic growth at the expense of virtually everything else – including, some say, the viability of the international currency regime, nuclear non-proliferation and basic rights in resource-rich countries.

This dichotomy creates a difficult situation as China emerges as the world’s second largest economy. If China, in the name of national sovereignty, does not buy into the international system, it becomes hard to argue that this system exists.

China’s unwillingness, for example, to join other members of the international community in pressuring Iran and North Korea to abandon nuclear weapons programs foreshadows the potential collapse of the nuclear non-proliferation regime. China’s active courtship of countries that violate human rights on a massive scale, such as Sudan, North Korea and Burma, similarly represents a preliminary decapitation of the international human rights regime.

Given its size and importance, and regardless of its intentions, China will, perhaps inadvertently, destroy the international system if it does not either actively endorse and work to maintain it, or reframe it for the greater common good. If it does neither, the world is in trouble.

If China sees itself as the heir and beneficiary of the US-led post-war international system, it must do much more to prevent and roll back nuclear proliferation in Iran and North Korea, pay a much greater percentage of costs for the United Nations, and curtail its mercantilist policies. It must also end its alleged corrupt practices in resource-rich parts of the developing world, align its currency policy with global norms, lead efforts to curb greenhouse-gas emissions, and, more generally, take into more account the fate of people outside of China in its decision-making.

If, on the other hand, as is its right, Chinese leaders have an alternative vision of what an improved international system might look like, the onus is on them to articulate that vision and outline what they are willing to do to realise it. There may be a better international model than the current one, but it will not emerge by default. As US Presidents Franklin Roosevelt and Harry Truman demonstrated in the 1940s, such a system must be articulated and then forged through decisive action and global leadership.

If China sees inviolable state sovereignty as the foundation of 21st-century international affairs, as now appears to be the case, then it must explain why this principle will not lead to the same disastrous consequences as it did in the 19th and early 20th centuries.

The US and the international community must acknowledge that today’s fast-rising China has earned the right to play an important role in shaping how the 21st century unfolds. But if China’s leaders will neither do more to support the current international system, nor articulate an alternative, and instead continue to hark back to 19th-century models of inviolable sovereignty, they will destroy a global order that, warts and all, has served the world exceedingly well. Those countries that value the current system will increasingly feel the urge to close ranks to defend it.