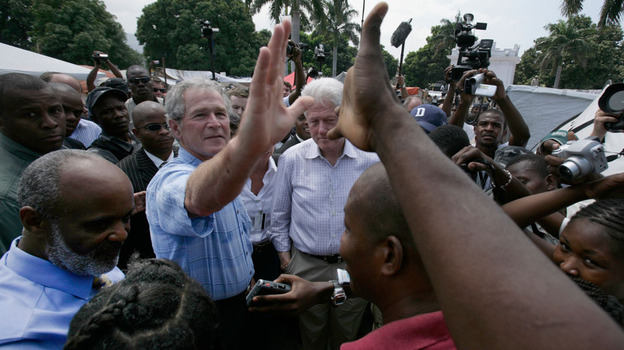 Former US Presidents George W Bush and Bill Clinton are visiting Haiti as part of their fund-raising efforts to aid the earthquake-stricken nation.

The have toured the badly-damaged capital, Port-au-Prince, and are meeting President Rene Preval.

They are also visiting camps for some of the 1.3 million homeless people.

The two were asked by President Barack Obama to lead US fund-raising after the 12 January earthquake that killed at least 220,000 people.

Many of the survivors now living in hastily-erected shelters, face the prospect of landslides or flooding in the coming rainy season.

Forming the Clinton Bush Haiti Fund, they want to “channel the collective goodwill around the globe to help the people of Haiti rebuild their cities, their neighbourhoods, and their families”.

Officials have said $11.5bn (£7.6bn) will be needed to rebuild the country and are expected to appeal for that much at a donors’ conference in New York on 31 March.

The two former presidents have both played a part in Haiti’s recent history. Mr Clinton helped the democratically-elected Jean-Bertrand Aristide return to power in 1994 after he was ousted in a military coup.

And the Bush administration was criticised for not doing enough to help Mr Aristide when a rebellion forced him out of power again in 2004.