She was a starving NYC artist who worked in construction to pay the rent, she climbs mountains, and she’s dating a guy 21 years her junior. Meet Kathryn Bigelow, the baddest dude in Hollywood.

As is so often, this year’s list of Oscar winners is exasperatingly mixed and – now that the pre-Oscar period is so hugely crammed with rival awards bonanzas, with the frontrunners exhaustively established – these results seem anticlimactic. It’s as if the awards season has scooped itself.

But at least this time there is a resounding and satisfying endorsement for a really excellent film: Kathryn Bigelow’s The Hurt Locker, a brutally powerful picture about the endgame in Iraq, which made its relatively modest debut at the Venice film festival in 2008 but kept on growing. This, notably, was a movie whose prestige was kept alive by critics. In a digital age when film reviewers are supposed to be losing their lustre, I

A little movie that won big 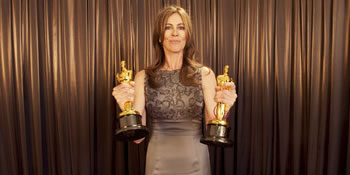 A film that was made with little cash but limitless willpower, defeated the highest-grossing film in history and won the best picture Oscar here Sunday night. The director of the spine-chilling war drama, Kathryn Bigelow, became the first woman to ever win the best director Oscar.

Kathryn Bigelow became the first female director to win the Oscar, and perhaps the best thing about that fact is she ignored it in her acceptance speech. After thanking everyone that helped her along the way she ended her onstage speech saying, “I’d just like to dedicate this to the women and men in the military who risk their lives on a daily basis in Iraq and Afghanistan and around the world. And may they come home safe.” Class.

Bigelow did it, I believe, because she quite simply made the best film: The tension generated by the film was extraordinary. Yes, situations involving defusing bombs are common enough, but somehow Bigelow made the bomb scenes human, not technical. Perhaps that was the woman in her?

Her low-budget Iraq war film, The Hurt Locker, about a bomb disposal team, was the big winner at the ceremony. It took six academy awards, including those for best picture and best original screenplay.

Cameron, who sat behind Bigelow at the ceremony in the Kodak theatre in Hollywood, was one of the first to offer congratulations when he reached over to tap her on the shoulder.

Bigelow described the award as a “moment of a lifetime” and dedicated her Oscar to the servicemen and women in Iraq and Afghanistan. “May they come home safe,” she said.

The Hurt Locker is an apolitical film focusing on the heroism of bomb disposal experts. It was critically acclaimed but not a box office success and was attacked as unrealistic by bomb experts.

Bigelow was only the fourth woman to be nominated for best director in the 82-year history of the Oscars.

The previous female nominees were Sofia Coppola for Lost in Translation in 2003, Jane Campion for The Piano in 1993, and Lina Wertmuller for Seven Beauties in 1975.

Barbra Streisand, the director of films including Yentl and The Prince of Tides, presented the award. In interviews after the ceremony, Bigelow resisted reporters’ attempts to encourage her to gloat about her victory over Cameron. “I think he is an extraordinary film-maker,” she said.

Much of the build-up to the Oscars had focused on the rivalry between the former couple, who married in 1989 and divorced two years later.

It was the subject of jokes from the hosts of the ceremony, Steve Martin and Alec Baldwin.

“She was so pleased to be nominated with him she sent him a beautiful gift basket – with a timer,” Baldwin said.

Bigelow has for decades been a female pioneer in the male-dominated world of action movies. Her previous films include Point Break, Strange Days and K-19: The Widowmaker. “I’m drawn to provocative characters,” she told the Guardian in video interview last year.

At the Directors Guild of America Awards, where she also won the top honour, Bigelow said: “I suppose I like to think of myself as a film-maker”, rather than as a female film-maker.

Bigelow thanked writer Mark Boal “for risking his life” in researching the script. Only 29 when she started, Bigelow has been a masterful action director from the get-go, with “The Loveless,” “Near Dark,” “Blue Steel” and “Point Break” between 1982 and 1991. Ever since, her career has been a triumph over preconceptions.