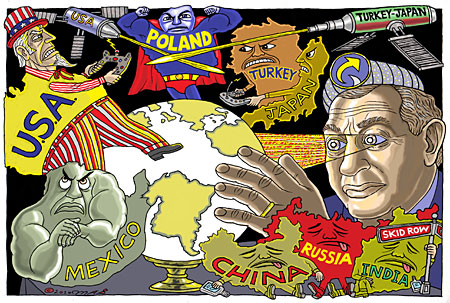 ,,, simon says:  Things are not right with the world

Yes, I’m dismayed by this weekend’s earthquake in Chile (I really adore the country), and am quite disgusted by the US government’s extension of the PATRIOT Act.  Fortunately, I know the Chileans will pull through just fine, and the US government will eventually collapse under its own weight.

What’s really grabbing my attention right now is what’s happening in the markets.

A few weeks ago I wrote a page ( see lessons of intelligence business ) in which I discussed the Gold/Silver ratio as an indicator of economic expectations.  The higher the ratio (the more silver it takes to ‘buy’ gold), the greater the indication of uncertain expectations in the marketplace.

Similarly, and perhaps more importantly, I pay very close attention to the “TED Spread,” which is essentially the rate difference between three-month Treasuries and LIBOR

In other words, the TED spread (Treasury/EuroDollar) is the difference between what banks pay each other for 3-month loans, and what the US government pays.

Naturally, since the US government is erroneously deemed “risk-free”, the banks’ rate is higher… usually averaging about 0.3% to 0.5%, or 30 to 50 basis points higher than the Treasury rate. When times are tough and banks are going out of business, the TED spread rises– it peaked at 460 basis points in October 2008 when banks were terrified to lend to each other.

Now, the opposite is happening.

For the last several weeks, the TED spread has dropped on an almost daily basis, well below its normal range and moving averages.  In fact, its current value of 13.71 basis points hasn’t been seen since… well, hardly ever.

Even during the rip-roaring good times of 2003-2006, when banks would throw money at everything and “risk” was just a punchline at happy hour, the spread was still within its normal range.

The TED spread is dropping for two reasons– first, the yield on 3-month treasuries has been inching up lately as investors are starting to demand more for their loans to Uncle Sam.

Second, the three-month LIBOR rate (at which many non-US banks lend to each other) is less than half of the rate from 6-months ago. This suggests that banks are now much more comfortable with their balance sheets and willing to lend to each other.

Both of these factors occurring simultaneously in such a dramatic fashion portends a significant correction.

Some may suggest that the low TED spread is simply an indication that the global economy is recovering. Possibly. If you read these posts you know that I have a relatively upbeat view of things given what I see on the ground.

But the TED spread being much lower than its levels during the bonanza times is simply insane.

There is much greater risk and the need for caution in finance… and banks know this.  The more likely scenario is that investors are starting to become skeptical of sovereign debt– and rightfully so, considering Dubai, PIIGS, and the US treasury ponzi scheme.

Two months ago, after spending a great deal of time scanning China intelligence and listening to their anti-treasury saber-rattling, I wrote about investor skepticism towards sovereign debt:

“Naturally, the chief reason that Treasuries are considered safe is because they are backed by the full power of the US government  printing press. Investors are wise to this trick, and smart money will not be fooled into longer term bonds unless there is another financial cataclysm.

As I survey the situation,  gold is nowhere near peaking exactly for this reason. In a flight to safety, institutional money still flows into the dollar. Gold will not truly break out until there is a panic in investors mentality regarding safety.

To put it more clearly, when worried investors start piling into gold instead of the US dollar to protect their assets, this is the sign that we are charging towards the top.”

What we’re seeing right now could be evidence of this shift in risk perception– that gold is starting to be considered ‘safer’ than Treasuries. The low TED spread suggests an aversion away from sovereign debt, and the high gold/silver ratio indicates that investors are putting a lot of faith in gold as a protective measure against uncertainty.

Because nothing moves up and down in a straight line, though, and as the TED spread is at historic lows, I would expect a correction, at least back to the range of 20-30 basis points.

I absolutely consider this low-hanging fruit at the moment, and I’d encourage you to consider an investment structured trade that bets on the spread between the Treasury and LIBOR widening beyond its current level.