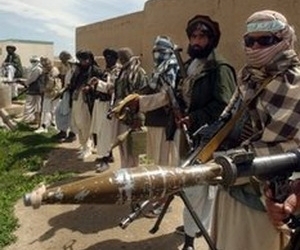 The Pakistanis are dangling a settlement for the Afghan war to the US. The bait is the Haqqanis, according to The New York Times. That’s right, the same Haqqanis who are the closest to al Qaeda:

What the Pakistanis can offer is their influence over the Taliban network of Jalaluddin and Siraj Haqqani, whose forces American commanders say are the most lethal battling American and NATO soldiers in Afghanistan.From their stronghold in Pakistan’s tribal area of North Waziristan, the Haqqanis exert sway over large parts of southern Afghanistan and have staged major terrorist attacks in Kabul, American officials say.

They are close allies of Al Qaeda. But they also have long ties to Pakistan’s military and intelligence agencies that have protected them inside Pakistani territory.

In return for trying to rein in the Haqqanis, Pakistan will be looking for a friendly Afghanistan and for ways to stem the growing Indian presence there, Pakistani and American officials said.

In briefings last week with reporters at his army headquarters, the usually reticent General Kayani repeated his offer at NATO to play a constructive role, while making it clear Pakistan was seeking broad influence in southern Afghanistan. The Haqqani network would be one of Pakistan’s strongest levers to do that.

And some officials in the Obama administration are considering this a viable option:

American officials said Washington was still debating the contours of any negotiated solution. But a baseline for Pakistan, they said, would be for it to engineer a separation between the Haqqani network and the Qaeda leadership.

One strand of thinking within the Obama administration calls for allowing the Pakistanis to keep the Haqqanis as part of Pakistan’s sphere of influence in southern Afghanistan, but only if Pakistan forces the Haqqanis to break with Al Qaeda and to push militants out of its areas, an American official said.

And finally, al Qaeda would be given safe passage out of the region.

According to a Pakistani military official, the Pakistanis would first have to resolve where Qaeda fighters would go and whether they might be given safe passage to Yemen or another location.

Read the whole thing. And who said the Pakistani Army and General Kiyani were no longer interested in maintaining strategic depth in Afghanistan by using the Taliban