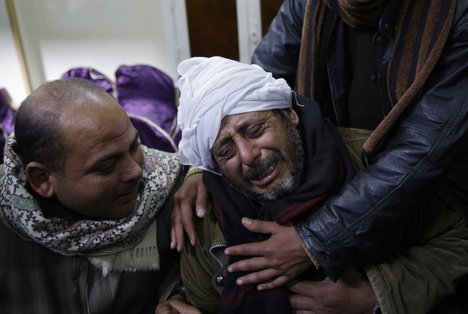 Just as religious fundamentalists view the power of science and modernity as the chief source of disenchantment, they see sorcery and superstition as a cause of evil.(1) But whether they realize it or not, sorcery, or magic and superstitious beliefs, were actually the real sources of all religions and sciences. Like sorcery, the ultimate goal of modern-day religions and science is to try and understand the world while controlling the forces of nature-both natural and human. Whereas some choose to pursue beliefs in an ideal God or multitude of gods, others embrace the very minute elements and particles of nature. But again, all belief systems are products of society, including science. They can trace their origins to the earliest tribes which used sorcery and sorcerers, their spells and enchanted incantations used impact the invisible world and to have access to unseen powers.

As a religious fundamentalist movement, then, it was a tragic surprise that the Islamic State of Iraq and Syria (ISIS) beheaded two women they accused of practicing sorcery. The tragedy is that they are merely supplanting their own remedies for the maladies of a modern world, replacing their own cures for a troubled and ailing past. The surprise is that ISIS has not yet understood the symptoms of the diseases they pretend to cure, or modern calamities they are trying to prevent, is found in their own superstitious beliefs motivated by intolerance and absolute authority. Furthermore, their apocalyptic faith is another way of systematizing magic, inspiring both fear and hope with a series of laws, rewards and barbaric killings despite their numerous failings. Ultimately, ISIS is trying to control the forces of politics, economics and a mixture of cultural decay and renewal.

Through observation and imagination, early humans knew both the natural world and human nature well. It is not surprisingly they tried to control both forces, trying to either prevent or manipulate weather and climate patterns, resources and agriculture, even tribal conflicts and war. Sorcerers, shamans, witch doctors, and medicine men and women also addressed societal concerns and the health needs of people through prayer, enchantments and by performing ceremonies. They as well pursued minor surgical procedures and plant-based medicines. To be certain, one of the earliest sorcerers was found in Israel during the Old Stone Age. Her burial site, surrounded by specially arranged tortoise shells, remains of birds, cows, eagles, boars, leopards, stones, even a human foot, suggests a close association with nature and animals, including the spirit world.(2)

ISIS believes in a spirit world, too, influenced by prayers, rituals, a force of nature (God), and twin abilities to hurt or heal. While their healing properties for ailing people entail modern practices, their curative and purifying practices regarding the world includes violence and killing. Ironically, they are embracing a kind of “black” harmful magic, the same harmful magic which they believe to be responsible for human ills. In fact, their commune with the supernatural ironically encourages violence as a path to paradise and making the world better by exterminating those of differing beliefs. Along with beheadings, massacres, crucifixions, drownings and burning alive their victims in cages, their heavenly and earthly leaders demand other sacrifices like cultural heirlooms and historical sites which do not fit into their superstitious, unseen and imaginary apocalyptic world.

The Syrian Observatory for Human Rights reported the two women sorcerers, along with their husbands, were beheaded for not only witchcraft and sorcery but blasphemy and espionage. The evidence was based on a manuscript covered in handwritten Arabic alleged to be some sort of proof of a magical spell. A secret monitoring group, which gathers information, reported the infraction to authorities who maintain a strict and extreme interpretation of Islamic law established by a self-styled caliphate. The two women were also accused of “black magic,” of working with elves, and of using un-Islamic medicines. Those who watched the beheadings were encouraged to mock the sorcerers, their limbs then cut off and hung in trees as a warning of what occurs to those who commit crimes of sorcery and black magic.

Though there have been many societal, cultural, technological and scientific transformations since ancient times, human nature appears to remain static. Simply recall, for example, the magical notion and prayers of a preemptive war against Iraq, which also caused the rise of ISIS and its apocalyptic faith in the supernatural. Also, remember the other black magic crimes fighting a fantastical Global War On Terror: torture, secret renditions, remote massacres, drone beheadings and burning alive innocent civilians with missiles and aerial bombing campaigns. The abilities of societies to do either good or harm still resides in the hearts and minds of humans, in how one perceives the world and others. Are magical spells, supernatural incantations, or even any belief system, in fact needed to understand how life and real world experiences are the best guides and examples?

“Truly have the gods not from the beginning revealed all things to mortals,” wrote Xenophanes of Colophon in 500 BCE. But within his statement lies a fundamental error, the beheading of critical thought within most belief systems, whether pagan, religious, secular, scientific or postmodern. Indeed, the so-called revelations from the gods originate from within the framework of human nature. They are then processed through biases and interpretations, limited experiences, prejudicial views and tribal allegiances. A recent and chilling interview with Abu Abdullah, mastermind of ISIS’ deadly car bombs and homicide bombers, points to this very certainty. Through violent jihad, he believed that the Shiites would start to think and be afraid, eventually converting to his brand of Sunni radicalism while submitting to the Islamic State.

Additionally, Abdullah thought those who refused to convert would leave the city. Even when he realized that those he opposed were just like him, choosing to die rather than convert, he still remained true to his superstitious belief. Towards the end of the interview, he admitted that his plan did not work. Even then: “That didn’t matter,” said Abdullah, “My idea was to continue until all of them converted. Or emigrated. It didn’t matter when. It didn’t matter!”(1) Herein lies another error found in most belief systems: They capitalize on human arrogance and ambiguous realities, specifically since they deal with the invisible that only “intimates” can really know. Instead of accepting the world as it is, and armed with their superstitions, they try to remake it according to what they think it should be.

Consequently, most belief systems try to remake others as well, some through beheadings unfortunately. Such beliefs are the products of society, societies which formulate their own concepts based on what is considered to be good and evil. It was just reported, for instance, that an ISIS-led chlorine blast near Baghdad killed 227 and wounded 130 more people, followed by another which used mustard gas. Similarly, even modern-day scientific or technological thinking, along with their sorcerers and sorcery, will ever be free from their own concepts of good and evil. Nor will they necessarily be used for the betterment of humankind. All beliefs are, in essence, somewhat superstitious, unaware that they might someday be used mindlessly or to behead their own, just as ISIS has done.

(3) http://www.spiegel.com. “‘I’m Not a Butcher’: An Interview with Islamic State’s Architect of Death,” by Christoph Reuter.

(Dallas Darling is the author of Politics 501: An A-Z Reading on Conscientious Political Thought and Action, Some Nations Above God: 52 Weekly Reflections On Modern-Day Imperialism, Militarism, And Consumerism in the Context of John‘s Apocalyptic Vision, and The Other Side Of Christianity: Reflections on Faith, Politics, Spirituality, History, and Peace. He is a correspondent for www.worldnews.com. You can read more of Dallas’ writings at www.beverlydarling.com and wn.com//dallasdarling.)