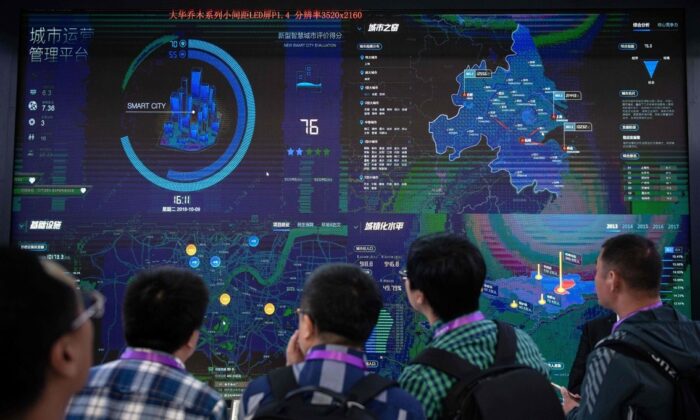 NEW YORK—China is eroding America’s military superiority and conventional deterrence through the integration of artificial intelligence (AI) systems in its military strategies, operations, and capabilities, an independent U.S. federal commission warned, adding that the United States needs to step up investment in the technology and apply it to national security missions.

China’s communist regime has established research and development institutes to advance its military applications of AI. Those institutes are equivalent to the Defense Advanced Research Projects Agency (DARPA)—a U.S. agency under the Department of Defense responsible for the development of emerging technologies for military use.

Military applications of AI technologies are being developed by Chinese researchers in the areas of “swarming, decision support, and information operations,” while the country’s defense industry is pursuing the development of “increasingly autonomous weapons systems,” an interim report released by The National Security Commission on Artificial Intelligence said on Nov. 4.

The Chinese Communist Party (CCP) declared it would be the world leader in AI by 2030, part of its broader strategy to challenge America’s military and economic position in Asia, as Beijing also pursues a process of “intelligentization” as a new imperative of its military modernization. The commission’s members described China as “our most serious strategic competitor” in their preface. China is also making an “active effort” to recruit global AI talent and to convince Chinese nationals working abroad to return to their home country.

As the AI race between Washington and Beijing continues to escalate, experts told The Epoch Times that the United States still holds the advantage. However, commission members said America’s leadership in AI “may be at risk sooner” than thought and said that a loss of this position would translate to U.S. military and intelligence agencies lagging behind with out-of-date systems, or being forced to buy more advanced technology from China and other countries.

He said the potential for swarms of armed drones to engage in battle is a “new form of warfare” that could save lives instead of deploying soldiers, though he said the potential for mass casualties could become an emerging humanitarian concern. Walsh said the CCP is encouraging its army to work closely with startups in the private sector and with universities to advance these technologies.

“China sees AI as an opportunity to close the gap between itself and global war machines like the U.S.,” Walsh said. “Leveraging AI, battlefield combat can be reduced to automated decisions produced via simulated environments giving military commanders newfound capabilities to create successful results.”

One aspect of China’s threat is its increasing efforts to “exploit civilian and commercial developments in AI” that would leverage an increasing number of companies to toe the Party line in both state and military purposes. The CCP has representatives in almost every large company in China.

Dr. Robert J. Bunker, adjunct research professor at the Strategic Studies Institute, U.S. Army War College, told The Epoch Times that Beijing has a “massive regime-backed effort going into AI,” describing the technology as key in the 21st century. He said the regime is using the technology to increase its comprehensive national power (CNP) as part of the great power competition it sees taking place.

“My understanding is that the U.S. lead in AI is quickly eroding over time,” Bunker said via email.

“While we have better computer scientists and engineers in the field and more cutting edge companies engaged in R&D (such as Google), China has far better access to massive datasets and informational resources gleaned from such platforms as WeChat that has 1 billion users.

“China is literally ‘vacuuming up’ immense amounts of data—this represents the digital nourishment that AI learns and evolves from.”

AI weapons are a concern because they’re capable of independent decision making, analysis, and target diagnosis, and can create an ability to wage war without human involvement, Walsh said. This comes amid a broadening anxiety over forced technology transfers from U.S. companies to Chinese authorities and intellectual property theft.

Domestically, there are generally two different opinions when it comes to the use of AI. Many defense experts have urged the country to move more quickly with the development of AI-enabled weapons systems and other capabilities, citing rising international threats and the possibility that the technology could save American lives and reduce civilian casualties.

On the other side, some technologists and ethicists urge the United States to slow its development of or abandon entirely the use of AI for military purposes, citing various potential problems, from “a catastrophic accident, to crisis instability, to the immoral weaponization of AI,” the report stated.

“The U.S. claims that it will work on developing these kinds of AI weapons with respect for international laws and the nation’s established code of moral conduct,” Walsh said. “However, detractors are concerned the reality is that the U.S. is scared of falling behind in a new arms race that could see it lose its hegemony on the battlefield.”

The Trump administration is watching China closely, with a number of U.S. officials in recent weeks publicly warning about the threats Beijing poses due to the proliferation in the West of Chinese companies such as Huawei, China’s foray into 5G technology and AI coupled with well-established concerns of China’s mass surveillance, espionage, and human rights abuses. The Chinese-owned video-sharing app TikTok is currently facing a national security review over its $1 billion acquisition of U.S. social media app Musical.ly. “Adopting AI for defense and security purposes is an urgent national imperative,” the report stated. “Accelerating applications of AI to national security missions is an intelligence, warfighting, and organizational necessity.”

The commission noted that it’s not “glorifying the prospect of AI-enabled warfare,” citing instead the choices made by America’s strategic competitors, which force the United States to “examine AI through a military lens.”

In a joint message, the chairman of the commission, Eric Schmidt, former CEO of Google, and vice chairman Robert Work wrote that global leadership in AI technology is a national security priority.

The technology will foster a “new generation of semi-autonomous and autonomous combat systems and operations.” Autonomous capabilities can have multiple applications “including for predictive analysis, decision support systems, unmanned platforms, robotics, and weapons (both cyber and physical).”

The commission report stresses that long-term strategic implications to implement AI technologies for military applications may be “even greater than the impact on any specific military task,” citing the speed of decision-making and accuracy of AI compared to humans. They note how some believe AI will bring in a new era of “algorithmic warfare,” rather than traditional warfighting factors such as the range of weapons systems.

“Battlefield advantage will shift to those with superior data, connectivity, compute power, algorithms, and overall system security,” the report said. “Reaching such a future will require the development of new operational concepts, organizational constructs, and decision-makers at all levels trained to understand AI and its associated technologies.”

The commission also detailed specific areas of warfare that AI could be applied to, including electronic warfare and anti-submarine warfare. In electronic warfare, “cognitive systems could autonomously detect and respond to signals jamming,” and in anti-submarine warfare, “an unmanned vessel could navigate the open sea and hunt adversary submarines for months at a time.”

One role of AI technology is its role in intelligence, with AI algorithms being able to go through troves of data to find patterns, detect threats, and identify correlations. AI tools can “make satellite imagery, communications signals, economic indicators, social media data, and other large sources of information more intelligible.” AI can also assist in America’s defense systems with tools that identify anomalies to inform counterterrorism and counterintelligence efforts.

DARPA’s AI Next campaign, launched in 2018, provides $2 billion in federal funding to new and existing programs, which Walsh said was a step in the right direction. This year, DARPA also tested an offensive swarm of drones.

Alexander M. Kehoe, co-founder and operations director at Caveni Digital Solutions, an SEO and digital marketing company, told The Epoch Times it’s clear that AI is a promising new frontier for the military due to its wide-reaching applications.

He said it was no surprise that China, as a growing power, has decided to go that route, but he said he doubted whether the CCP would achieve global dominance in AI by 2030. He also called the propositions of Google working in China to develop AI “concerning.”

“Recent breakthroughs in quantum computing by NASA and Google are a huge step in the direction of creating the computational power needed to develop even more advanced AI,” he said. “So these discoveries are still being made in the United States.”

“Should the U.S. military be looking into funding more artificial intelligence research? Absolutely,” Kehoe said. “Does it look like China will overtake the United States in the near future? Absolutely not.”

The Department of Defense can directly take advantage of autonomous and intelligent systems, the commission stated, with the Intelligence Community more effectively processing and analyzing vast amounts of data, and other agencies possibly using it to find efficiencies in business operations so other resources can be sent to the missions with the highest priority.

AI also provides an advantage in national security missions where speed is vital—for example, in cybersecurity or missile defense. There are currently over 600 active AI projects in the Defense Department, according to a recent estimate.

The Five Eyes Technical Cooperation Program, a collaborative five-nation forum between the UK, U.S., Canada, Australia, and New Zealand, also recently started an AI Strategic Challenge, which would be a three-year effort focused on AI applications for allied militaries, according to the report.